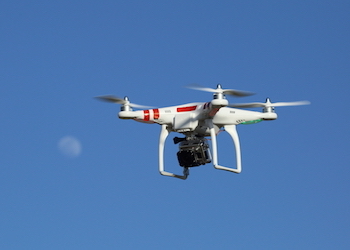 How Can Authorities Stop UAV's After Suspect Drone Collision At Heathrow

Officials in Britain have launched an investigation after a British Airways flight landing at Heathrow was hit by a suspected drone on Sunday.

The Airbus A320, inbound from Geneva and carrying 137 people, was on its landing approach when it struck the object at an altitude of roughly 1700 feet.

A British Airways spokesman said of the accident:

“Our aircraft landed safely, was fully examined by our engineers and it was cleared to operate its next flight.”

If British authorities confirm the object as a drone, it will be the first confirmed collision between a commercial aircraft and an Unmanned Aerial Vehicle (UAV) in the UK.

The incident follows repeated warnings from airline industry officials about the dangers posed to passenger aircraft from personal drones, and with press reporting widely on the event; those officials will no doubt be pushing for heavier regulation of drones within high-risk areas.

With few reports on what is being done to combat the growing popularity of drones and the risks they pose to aircraft, we've rounded up a few of the more promising (and not so promising, but awesome enough we need to include them) drone countermeasures in development to prevent similar collisions in the future.

First, and the most encouraging, is the Counter-UAV System being developed by Airbus Defense and Space. Introduced at the Consumer Electronics Show in Las Vegas back in January this year, and marketed as a Quick-Response Protection Against Micro-Drones in its press release. It's a pretty impressive piece of equipment.

“The system offers very high effectiveness by combining sensor data from different sources with latest data fusion, signal analysis and jamming technologies. It uses operational radars, infrared cameras and direction finders from Airbus Defense and Space's portfolio to identify the drone and assess its threat potential at ranges between 3.1 and 6.2 miles (5 and 10 Kilometers).

Based on an extensive threat library and real-time analysis of control signals, a jammer interrupts the link between drone and pilot and/or its navigation. Furthermore, the direction finder tracks the position of the pilot who subsequently can be dealt with by law enforcement. Due to the Smart Responsive Jamming Technology developed by Airbus Defense and Space, the jamming signals are blocking only the relevant frequencies used to operate the drone while other frequencies in the vicinity remain operational. Since the jamming technology contains versatile receiving and transmitting capabilities, more sophisticated measures like remote control classification and GPS spoofing can be utilized as well. This allows effective and specific jamming and, therefore, a takeover of the UAV.”

The Counter-UAV System will be available from mid-2016.

Similar to the Airbus unit but already in use commercially is Drone Shield. Featured as part of the new security measures at the Boston Marathon this year, the Drone Shield uses advanced sensors to detect drones and integrates into existing security systems to alert security to a drone's presence. Described on Drone Shield's website as:

“An enterprise-grade sensor network with our patent-pending acoustic detection technology can sense drones that are invisible to radar or that lack radio-frequency links.”

An Eagle… Yep, You Read That Right. An Eagle

By far my favorite, but maybe the least practical for protecting airports, is the solution developed by Dutch officials. Training Eagles to take out illegal drones. How the Eagle will identify which drones are legally allowed to operate or if they are operating outside of regulated altitudes, they didn't give out exact details.

I'm also unsure it would make much difference for an aircraft to hit a drone or an Eagle fighting with a drone, but, as this video from Inside Edition shows, the concept alone is worthy of sharing.

The Best Of The Rest

Authorities in the U.S. recently announced the compulsory registration of Unmanned Aerial Systems, so far collecting the details of over 400,000 drone owners to assist in identifying drones involved in incidents.

And it was recently reported that the U.S. Secret Service has been experimenting with Signal Jammers for use around the White House.

There is also a push to include Geo-Fencing software in drones to keep them away from restricted areas but, for now, the only unit offering a commercially viable solution appears to be the Airbus Counter-UAV System.

5 / 5 ( 1 vote )
Share this:
AwardWallet Tip of The Day
Did you know that some accounts may not update in the background automatically? You can quickly update those accounts by: Show me how