Editor note: this post is in the process of being updated to reflect all of the recent changes to award change and cancellation fees.

Award flights. It’s often necessary to book months out to secure availability, leaving a huge expanse of time for life to get in the way of the best-laid travel plans. So what happens when you need to change or cancel an award flight? That’s what we cover here. When you can change or cancel an award ticket, if there’s a financial penalty for doing so, and how having airline elite status affects the fees.

It’s worth noting that holding elite status with an airline is one of the easiest methods of countering change fees for award flights, with most airlines either reducing or waiving change fees for elite status flyers. And if you’re ever caught out by a life or world event and can’t make your flight, check the travel insurance and protections offered by your credit card provider, as cards like the Chase Sapphire Preferred® Card offer fantastic travel protections that could cover the cost of your flight under the right conditions. Seriously review the benefits on these cards before you consider purchasing any travel insurance!

The reality is, change and cancellation fees are here to stay, and the policies will only get more restrictive over time as rewards programs continually ‘enhance’ their frequent flyer benefits. This post sticks to the policies for each program rather than tips for avoiding the fees, as we’ll be covering tips and strategies for avoiding airline award change fees in another post.

You can change or cancel SkyMiles award tickets up to 72 hours before departure for a $150 fee which is waived if you’re Platinum or Diamond Medallion. If you need to change flights on the day of your flight, Same-Day Confirmed and Standby changes for Award Tickets will cost Silver Medallion and below $75, while the fee is waived for Gold, Platinum, and Diamond Medallion members. Inside the 72 hour mark, miles cannot be redeposited for award fares. Tip: Delta is known to make exceptions for Diamond Medallions.

American doesn’t charge a fee for date changes 21+ from departure, inside 21 days of departure, it is a $75 fee (waived for elites). Origin and destination change fees are waived for Executive Platinum members or for AAnytime Award fares, but cost $150 for MileSAAver Awards and all partner awards. Any change to award type requires redeposit and new award ticket issued.

MileagePlus changed award policies back in October 2016. United’s fees are based on your elite tier, with current change and cancellation fees staggered from $0 for Premier 1K members to $200 for General members. Fees are per ticket, and changes to awards that include Star Alliance partners must be made 24 hours out.

Changes to Alaska Air award tickets follow the same pattern as American and United, with the cost of making changes or canceling an award fare waived for top-tier elites.

In fact, if you book a fare using Rapid Rewards points, and that fare goes down, Southwest will help cancel the ticket and rebook you at the lower rate, refunding you the points difference during the process. The caveat; if you need to change your award ticket and the price has gone up, you need to pay the difference.

Up until the end of 2016, Aeroplan had one of the most generous change and cancellation policies of any frequent flyer program, charging just C$90 to change or cancel/redeposit an award. Changes that kicked in for 2017 have made that process much more expensive, costing up to C$200 now for a round-trip award.

North American frequent flyer programs seem set on adding expensive fees and unrealistic time-frames to award fare changes, with the only exception to this rule being Southwest Rapid Rewards. It’s essential to understand the change and cancellation fees of the program you use to book the award, not the airline you fly as the policy is dictated by the redeeming rewards program, not the airline.

If you have any tips, tricks, or hacks to avoid paying award change and cancellation fees we’d love to hear from you, so please reach out in the comments.

4.8 / 5 ( 9 votes )
Share this:
AwardWallet Tip of The Day
Did you know that if someone else accesses your AwardWallet account, you will see an alert at the bottom of the page? Clicking that alert will show you all the current sessions accessing your account. If you see something that doesn’t make sense, you can log the other sessions out and change your AwardWallet password. We highly recommend enabling two-factor authentication on your account for increased security. Show me how 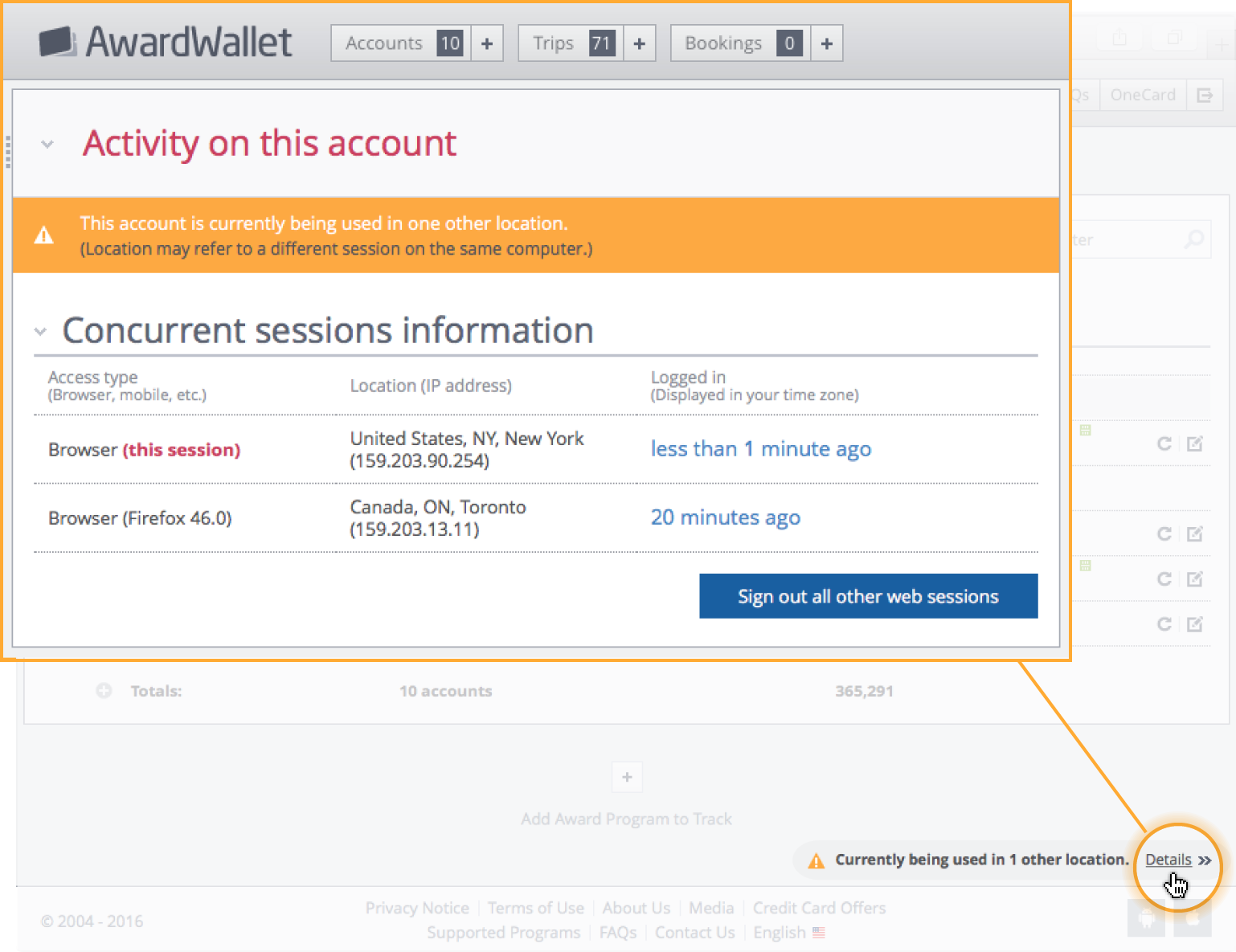