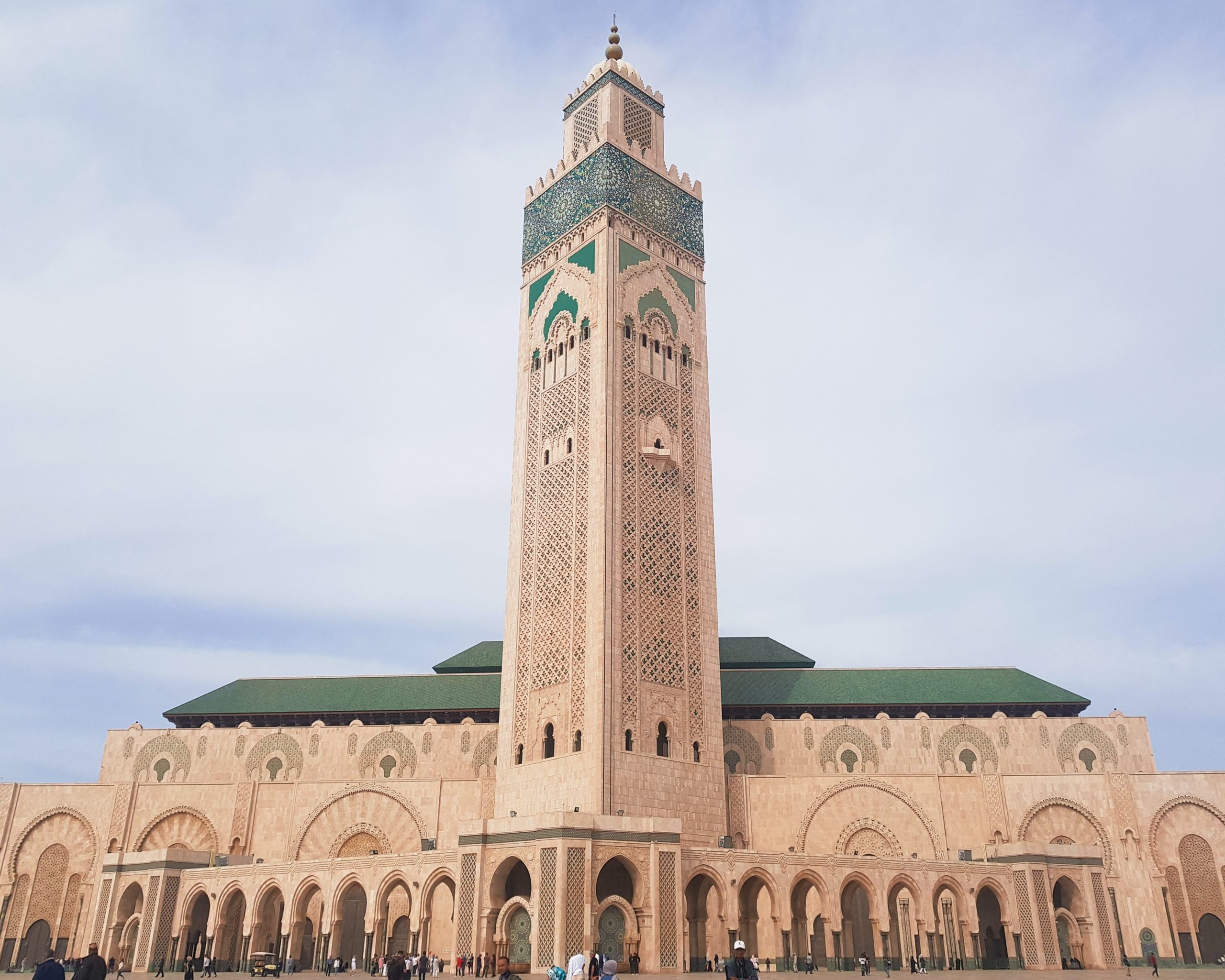 Magically, the borders of Europe have been redrawn, effective immediately. At least, that’s what American Airlines has decided to do for its award program. On April 23, Morocco was moved out of Africa and into Europe for American Airlines’ AAdvantage region-based award chart. Let's look at what impact that will have on award travel. 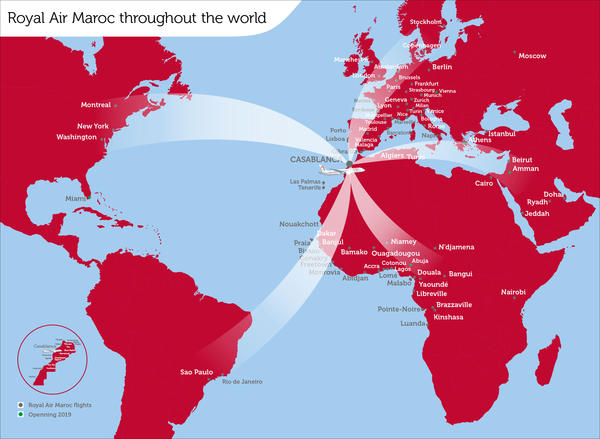 The American Airlines network includes one route to Morocco: Philadelphia to Casablanca. That route was scheduled to begin service in June 2020, but it was delayed to 2021 as a result of COVID-19.

Here's what the region change means for travel on Royal Air Maroc to and from its Casablanca hub:

From the table above, it is immediately obvious that the region change is mostly positive for AAdvantage award travelers. Unless you were looking to travel within Africa—or flying in business class to Asia—moving Morocco to Europe decreases mileage costs across the board. Not only that but also it adds new routing options for a variety of destinations.

Impacts on Travel Between Morocco and U.S.

Any U.S.-based travelers seeking out a Moroccan vacation using AA miles will love this news. AAdvantage award costs between the two countries dropped by roughly 25% in both economy and business class.

However, there's another award program to consider for those who can travel from Royal Air Maroc destinations in the United States. The Etihad Guest program charges just 22,000 miles one-way in economy and 44,000 miles one-way in business class for Royal Air Maroc flights over 2,001 miles. Those rates are cheaper than the 30,000 miles (economy) and 57,500 miles (business class) that AAdvantage will now charge for these award flights.

For reference, the Moroccan airline flies Dreamliners to the following U.S. cities:

Etihad Guest now charges by segment. So, travelers who can't fly out of these four airports would have to pay more miles for a connecting flight or book a separate positioning flight. Either way, the reduced AA award rates will start to look more appealing.

Note that once American Airlines completes the launch of its route between Philadelphia and Casablanca, web specials could further reduce the mileage cost of getting to Morocco from the United States. AwardWallet Editor JT Genter was able to book one-way awards between Casablanca and a couple of U.S. cities for just 17,000 miles through Economy Web Specials before the route was postponed.

Impacts to Travel Between U.S. and Europe

Potentially the biggest impact from AA's creative geography is travel between the United States and mainland Europe. Before this change, AAdvantage routing rules prevented passengers from connecting in Morocco on the way to or from Europe. Now that this is possible, it opens more options to connect to Europe and could reduce the out-of-pocket cost of European awards. Let's discuss how.

Until now, AAdvantage had four options for transatlantic travel: American, British Airways, Finnair, and Iberia. The number of routes offered by American and British Airways far outweighs the offerings of Finnair and Iberia. However, MileSAAver space—particularly in business class—can be very hard to find when it comes to actually flying on American Airlines.

That left British Airways as the most likely option for transatlantic travel. While having any option is better than none, British Airways passes on notoriously high taxes and fees on award tickets. For travelers looking to save on airfare through mileage redemptions, this can be a tough pill to swallow. With that said, some options now exist for those trying to avoid sky-high award ticket fees with British Airways.

By moving Morocco to Europe, AAdvantage members get access to more award space and another option with reduced fees. We can't price out a Royal Air Maroc award on AA's website just yet. But we can estimate what the taxes and fees might be by using an ITA Matrix breakdown of a sample fare. For instance, here's the breakdown of a one-way business class fare from Amsterdam to New York City on Royal Air Maroc: 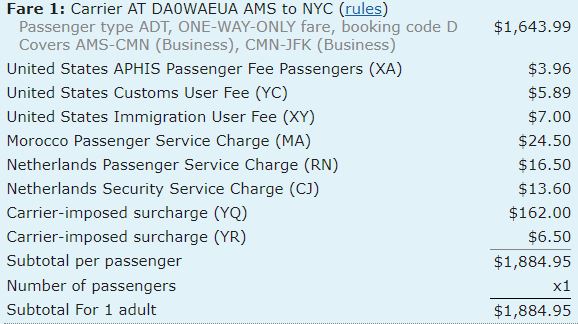 When you book an award ticket, you eliminate having to pay the $1,643.99 base fare. Even if all remaining $240.96 in taxes and fees are levied on an AAdvantage award, that's still far less than the $500+ passed on by British Airways.

Impacts on Travel Between Morocco and Europe

A big winner coming out of this news is intra-Europe travel. By adding Morocco to Europe, this expands the vast number of countries and destinations available to travelers using American miles in the region. You can now fly between Morocco and anywhere in Europe for 12,500 miles one-way in economy or 22,500 miles in business class.

However, you may be able to pay even less than that by booking nonstop awards through other Oneworld partners. Etihad Guest miles, British Airways, or Iberia Avios may provide cheaper award rates depending on how far your European travels take you. For example, it's just 539 miles to fly between Casablanca and Madrid. That means awards cost just 4,500 miles each way using British Airways Avios. 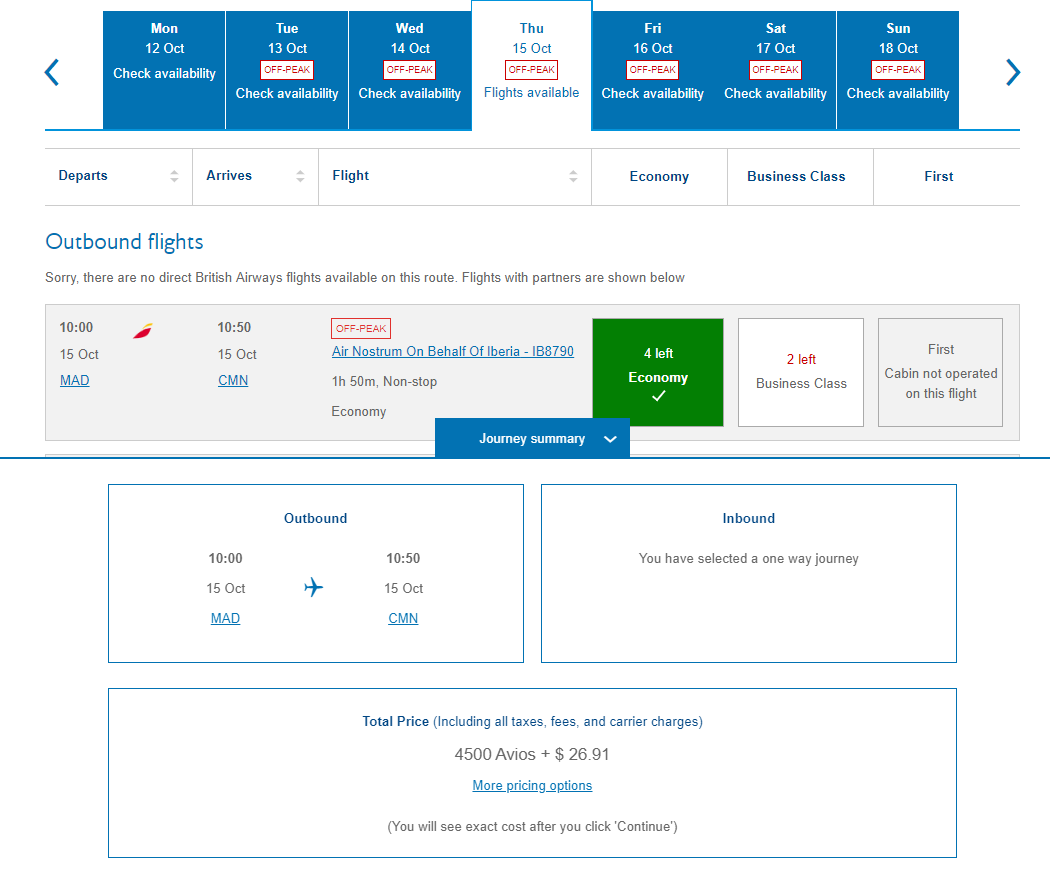 Impacts to Travel Between Morocco and the Middle East, Asia, and South America

Royal Air Maroc flies to three destinations in the Middle East, two in South America, and one in Asia. All of these routes—with the exception of business class between Casablanca and Beijing—decrease in award cost as a result of Morocco's region reclassification.

More significantly, getting between Europe and any of these three regions becomes quite a bit easier for those using AA miles. Due to AA's routing rules, Royal Air Maroc wasn't an option to fly between Europe and these regions when Morocco was classified as part of Africa. But, now that it's considered part of Europe, it's yet another option available to travelers flying between these regions. More flight routes mean more potential award seats for mileage redemptions.

Impacts to Travel Between Morocco and Rest of Africa

Unfortunately, it's not all good news. By moving Morocco out of Africa, AA raised the cost of awards between the country and the rest of the continent by over 50%. As a result of the move, a 653-mile economy flight between Casablanca and Algiers, Algeria now costs 30,000 American miles each way.

Travelers interested in flying Royal Air Maroc between Morocco and the rest of Africa might want to consider an alternative award program, such as Etihad Guest. Below is the distance-based award chart the Etihad Guest program uses for travel on Royal Air Maroc. Pricing applies by segment:

With a few exceptions, American Airlines' decision to move Morocco from Africa to Europe benefits award travelers. For the majority of destinations, award redemption on the newest Oneworld member will cost fewer American miles.

Not only do mileage prices drop, but also award routing options increase. The additional options allow transatlantic travelers to avoid the very high taxes and fees passed on by British Airways.

However, be advised that Royal Air Maroc flights cannot be booked online via American Airlines. Prospective travelers will need to use a tool like ExpertFlyer to search for award space. Then call American Airlines reservations at 1-800-882-8880 to complete the booking.