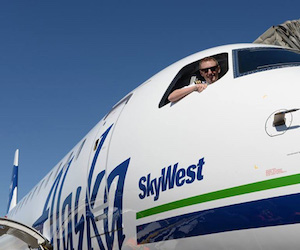 Alaska Airlines has taken aim at Southwest's dominance in California launching six new return flights in the state. Beginning in March 2017, the new flights will fly between San Diego and Sacramento, and Burbank and San Jose.

Alaska will fly three return flights per day on both the San Diego-Sacramento and Burbank-San Jose routes using 76 seat E175 jets operated by SkyWest Airlines. The flights will feature three classes running a configuration of 12 first class and 12 premium class seats with 52 seats in economy.

Southwest will begin offering one direct flight per day between San Jose-Baltimore/Washington and two on the new San Jose-Salt Lake City with the first flights in early-November this year.

“Two new nonstop routes here in San Jose, a city we’ve served since 1993, typifies the kind of difference we aim to make in connecting many of our long-time markets with time-saving service,” said Andrew Watterson, Southwest’s Senior Vice President of Network and Revenue.

The new direct Washington service is the first direct flight to the Silicon Valley technology hub, a route that according to Director of Aviation, Kim Becker, was the second most requested domestic destination in the country in a recent survey of Silicon Valley executives.

Alaska has made no secret they are going after Southwest in the fight for California's business flyers, and I don't think this is the last we will see of the two airlines going head to head in the Golden State.

Some stiff competition is always a good thing for customers in the aviation industry, and we should see fares remaining very competitive in and out of the Californian hubs, particularly in the lead up to Alaska's takeover of Virgin America.

5 / 5 ( 1 vote )
Share this:
AwardWallet Tip of The Day
Did you know that you have a personal referral link in your AwardWallet profile? If you invite people to AwardWallet using your referral link, you will receive an AwardWallet upgrade coupon for every five members you invite. Also, if these users ever purchase an upgrade, we will credit your AwardWallet account with AwardWallet Bonus points, which can be redeemed for points and miles in your program of choice. We spend roughly 50% of the revenue we receive from those referrals to purchase those miles for you. All of this can be tracked via the Invite to AwardWallet widget in the left navigation bar on your Accounts page. Show me how