All About Norwegian Rewards & CashPoints

Norwegian Rewards is the frequent flyer program for Norwegian Air based out of Fornebu in Norway. Established in 2007, Norwegian Rewards first gained real traction in 2011 with the addition of European earning partners, allowing members to earn CashPoints (the official currency of Norwegian Rewards) outside of airline spend alone.

Earlier in 2016, Norwegian announced significant changes to its loyalty program, introducing benefits similar to elite perks found in conventional frequent flyer programs, but with a slight twist. No elite tiers.

Members are rewarded with a new benefit when they fly six segments, which they can choose from a list of rewards that includes additional CashPoints, free checked bags, free seat selection, and free fast-tracking.

The 3rd largest low-cost carrier in Europe, Norwegian Air made its first long-haul flights to the U.S. in May 2013, adding scheduled flights from Oslo and Stockholm to New York, with Fort Lauderdale flights coming online from several Scandinavian cities in November 2013.

Norwegian now operates flights from cities all over Europe to multiple destinations in the U.S., and recently received approval from the U.S. Department of Transport to increase its roster of transatlantic flights further via Irish-based subsidiary Norwegian Air International, still operating under the Norwegian Air branding.

With close to five million members, Norwegian Rewards is small in comparison to the legacy frequent flyer programs this side of the Atlantic. But with strong double-digit growth in membership numbers, a rapidly expanding transatlantic network, a unique frequent flyer program, and competitive fares, Norwegian Rewards has a lot to offer its members.

How does Norwegian Rewards Work?

The program operates its own currency, CashPoints, essentially a cash back currency with each point equal to one Norwegian Krone (US$0.14 or 7 Krone to US$1). But, unlike the traditional frequent flyer programs we’re used to in the U.S., Norwegian Rewards doesn’t offer elite status tiers such as Silver or Gold. Instead, they have a simple system that rewards members with perks based on the number of segments flown. 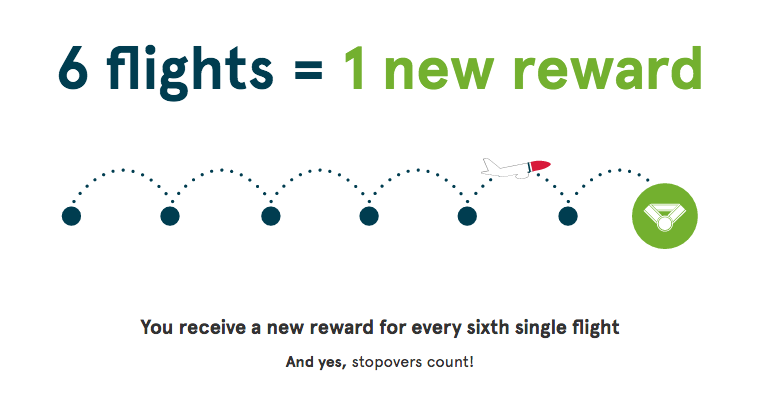 Earning elite benefits is where Norwegian Rewards gets interesting. As of March 2016, members can choose one reward from a list after every 6 flights flown, and that includes stopovers. The first reward of 2% CashPoints is automatically assigned after the initial six flights are recorded, immediately doubling your earning potential, and members can choose the next benefit after a total of 12 flights. 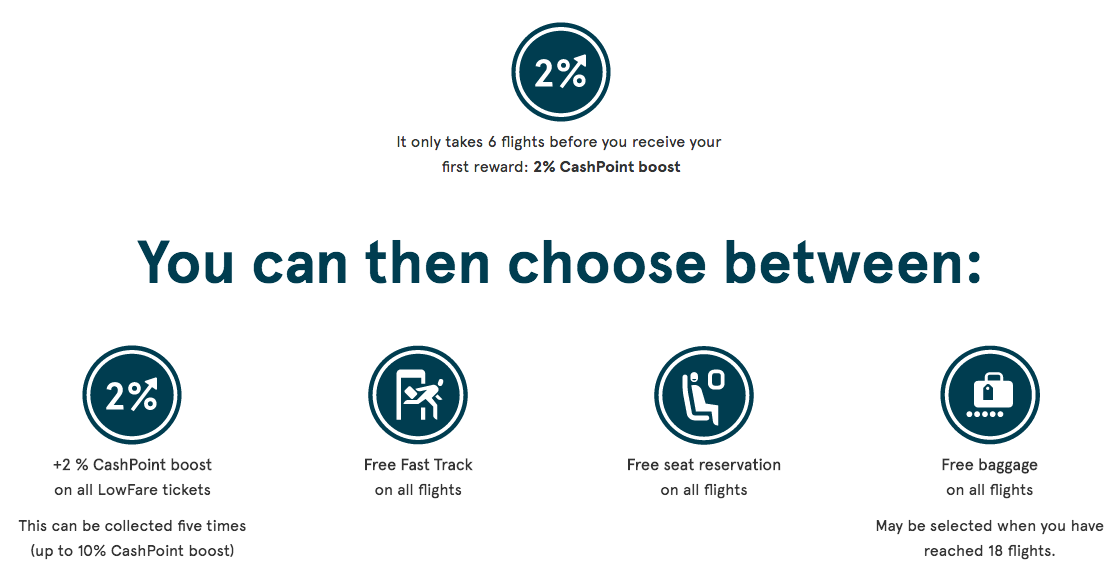 Each reward is valid for 12 months across unlimited trips, and the only restriction on choosing your perks appears to be Free Checked Baggage, which can’t be claimed before members have traveled 18 segments. The program tops out at a maximum 8 concurrent rewards, achieved by flying a total of 48 segments, all of which are valid for 12 months from the date they are received.

The program tops out at a maximum 8 concurrent rewards, achieved by flying a total of 48 segments, all of which are valid for 12 months from the date they are received.

Any flight on the Norwegian network qualifies for rewards so you can take advantage of ultra-cheap intra-European flights, which in Norwegian’s case can be down as low as US$20/40, and they will count towards your rewards total. With one checked bag and seating assignment for transatlantic airfares costing roughly US$90 per flight, the potential savings over 12/18 flights, with these rewards activated, could be over $1,000.

With one checked bag and seating assignment for transatlantic airfares costing roughly US$90 per flight, the potential savings over 12/18 flights, with these rewards activated, could be over $1,000. 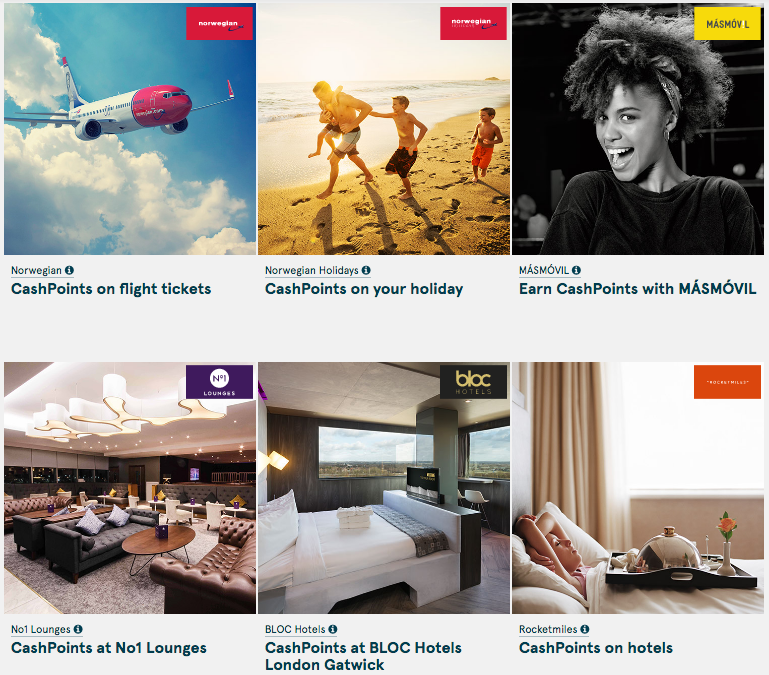 Members will earn 2% CashPoints for every dollar spent on LowFare-tickets purchased directly through Norwegian, and up to  20% CashPoints on all Flex airfares which typically cost more than double a LowFare-ticket.

Opportunities to earn CashPoints are not as extensive as frequent flyer plans we’re more familiar with and there are no online malls or apps for extra CashPoints, but agreements they do have are somewhat more lucrative than U.S. based loyalty programs.

You can earn 12% CashPoints on stays at the Bloc Hotels London Gatwick (Norwegian’s UK base), effectively 12% cash back on your stay and that is before taking into account any credit card bonuses.

Norwegian is also partnered with RocketMiles, allowing members to earn between 100 – 1,000 CashPoints per night on hotel stays booked through the site.

Norwegian Rewards members receive a 15% discount off the cosy of lounge entry at No1 Lounges across the UK, and receive 25 CashPoints per booking. Members can earn on car rental, airport transfers, airport parking, and tours, and there are plans to expand the number of earning partners across the UK, U.S., and Europe, particularly across utility providers and retail partnerships.

There is no U.S. based credit card for Norwegian Air. However, Bank Norwegian offers a card earning up to 20% bonus CashPoints when flying Norwegian Air, plus a 1% bonus on all other purchases.

For U.S. passengers, the best cards to book Norwegian Air flights are The Platinum Card® from American Express, which offers 5X points on airfare booked directly with the airline or through Amex Travel (on up to $500K per calendar year), or the Chase Sapphire Reserve® and Ink Business Preferred® Credit Card which both earn 3X Ultimate Rewards points on most travel purchases and come with fantastic travel benefits.

Redemption is only available on Norwegian Air as the program does not currently have any transfer or redemption partners in place. That said, members can redeem CashPoints for airfare, baggage, insurance, seat selection, and ticket changes, including taxes & fees. And there are no blackout dates for travel, with similar rules applying to purchases made with CashPoints as would apply if passengers were to pay with cash. 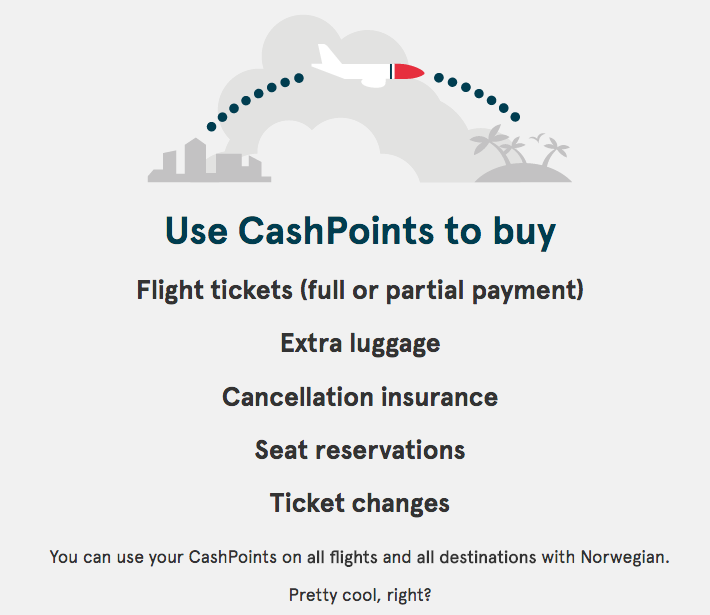 While Norwegian doesn’t have a Business Class, it does offer a Premium Economy product on all 787-800 and 787-900 long-haul aircraft with premium seats, extra legroom, welcome drinks, a 3-course meal with drinks, breakfast, and lounge access at select airports.

Yes, as per the T&C’s on Norwegian Rewards’ website.

Unused CashPoints expire and are deleted every 24 months after the end of the calendar year in which the CashPoints were earned. That means that CashPoints must be used in the year that they are earned or during the two following years

Is Norwegian Part of an Airline Alliance?

Yes. Norwegian has jumped onboard Airlines for Europe (A4E) which sees it teaming up with Air France-KLM, EasyJet, IAG Group and Lufthansa group among others. The alliance doesn’t currently offer any form of reciprocal earning or redemption options.

Norwegian Rewards is not likely to be on the radar of rewards devotees chasing aspirational redemptions. But for anyone making regular transatlantic trips that like's to keep a tight rein on finances, Norwegian offers a unique take on rewards that awards perks no matter what the ticket costs and they are rewards that will save passengers hundreds of dollars per year if used regularly.

With recent approval from the DOT to expand its U.S. operations, flying Norwegian Air is becoming increasingly convenient, and with a good hard product and some of the best prices across the Atlantic, they are hard to beat.

Flown Norwegian Air and have an experience to share? Let us know in the comments.

4.4 / 5 ( 9 votes )
Share this:
AwardWallet Tip of The Day
If you choose to store all of your passwords locally on your device, instead of storing them in our secure database, you can, and should, periodically back them up into a file. In the event that you delete your cookies, these passwords would be deleted, and with a proper backup you'd be able to safely restore from that backup file. Show me how 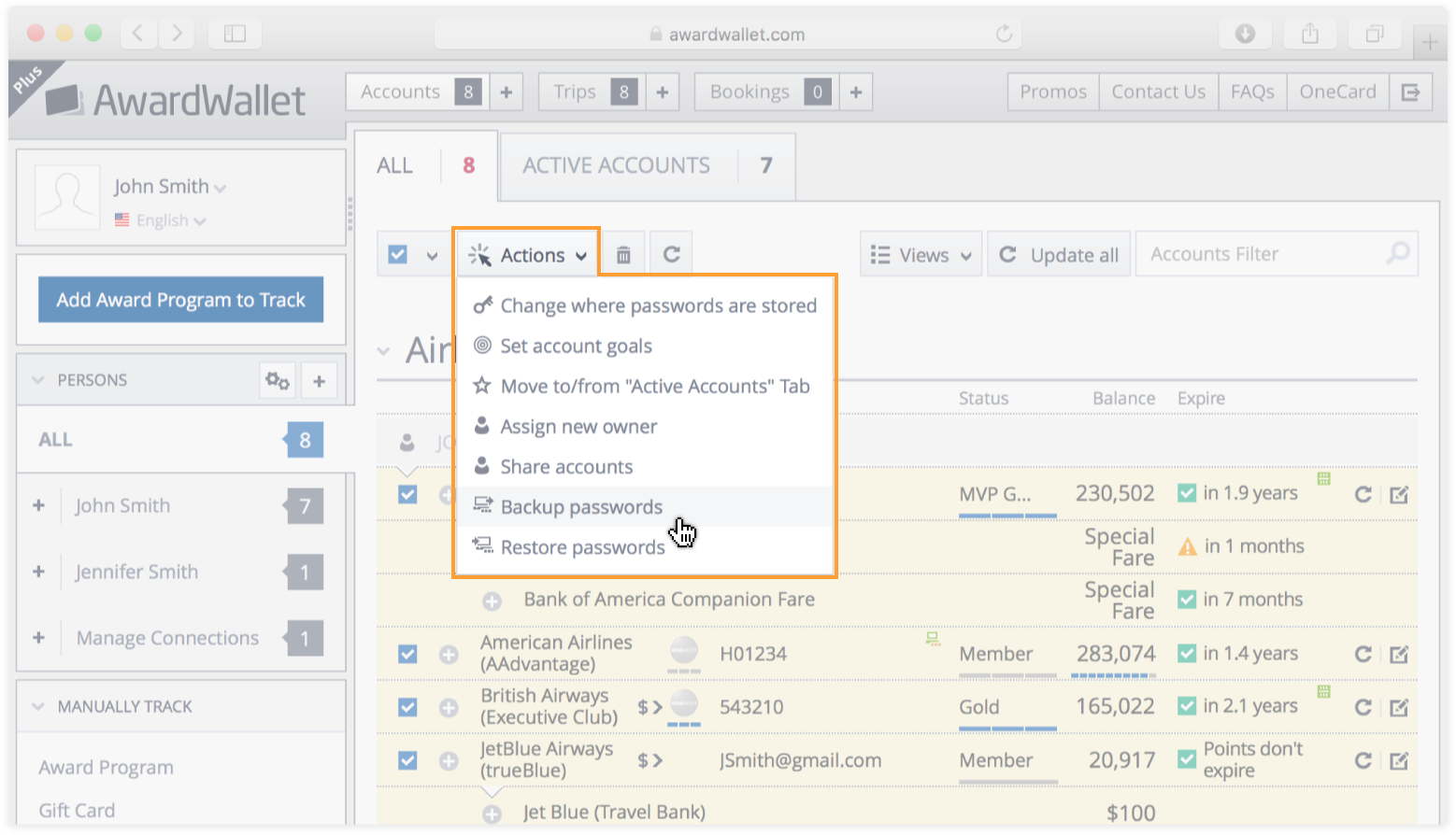