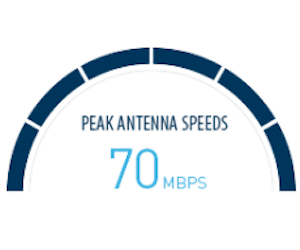 Addressing one of the biggest frustrations for flyers, Delta has announced a major expansion of hi-speed in-flight WiFi services, committing to install Gogo's 2Ku systems to over 600 aircraft.

As part of a press release on the companies website:

“Delta customers have expressed an interest in their time in the air being as productive as their time on the ground, and 2Ku satellite offers a vastly upgraded in-flight Wi-Fi experience,” said Tim Mapes, Delta’s Senior Vice President and Chief Marketing Officer. “By committing to more aircraft with 2Ku technology, we’re providing Delta customers with faster and more reliable in-flight connectivity as a part of Delta’s commitment to always delivering the industry’s best on-board services.”

Gogo's 2Ku is the next generation of in-flight WiFi technology capable of providing a consistent hi-speed connection over most areas on the planet, including oceans. Using satellite links, 2Ku runs around 20 times the bandwidth of traditional ATG (air to ground) technology and heralds the arrival of live video streaming and TV in-flight.

Delta also announced plans to roll out IPTV in late 2016 “giving customers the ability to watch live TV from their own devices on 2Ku-enabled aircraft.”

When Will It Be Available?

The installation has already started on Delta’s Boeing 737-800 and Airbus A319 aircraft, and although they have not released an exact timeline, we can expect installation to be complete on 35 aircraft by the end of 2016. Delta will also fit the new 2Ku system to the Airbus A330-900Neo set to launch in 2019 and the A350-900 aircraft scheduled for 2017.

Delta's install of the first-gen Ku-Band Satellite WiFi on its international wide-body fleet is getting close to completion with the last plane to be fitted in September 2016.

Delta already operates the world's largest WiFi-equipped fleet with more than 1000 aircraft running in-flight WiFi services, but the new 2Ku technology will be a huge improvement over the current offerings.

35 planes out of a 1000+ fleet may not seem like a lot of aircraft to be running 2Ku by the end of the year but with the technology moving so fast it's difficult for the hardware developers of aircraft tech to keep up.

Personally, I think it's good to see a commitment from Delta to upgrading passenger's experience by offering a fast in-flight solution.

Ironically, we may soon see faster connections in Delta's planes than we see on the ground in its terminals.

5 / 5 ( 1 vote )
Share this:
AwardWallet Tip of The Day
Did you know that with a wide display you are able to expand the AwardWallet window to see the Last Updated column? You can easily see the last time your balance was checked by AwardWallet. Show me how