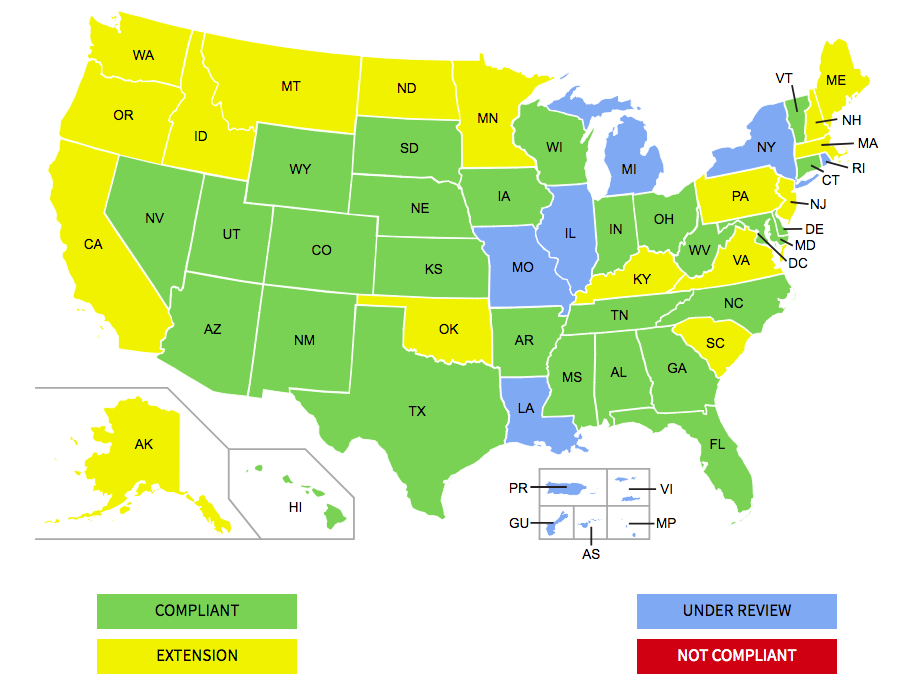 Offers for the HSBC Premier World Elite Mastercard® credit card, HSBC Premier World Mastercard® credit card and The Ritz-Carlton™ Credit Card are not available through this site. All information has been independently collected by AwardWallet and has not been reviewed or provided by the card issuer. Some offers may have expired. Please see our card marketplace for available offers.

Starting October 20, 2018, residents of states impacted by the Real ID Act will need to update their identification to a TSA approved ID to fly any commercial flight, domestic or international. The states involved have all failed to issue a drivers license or state ID that is compliant with the Real ID Act.

Residents of the states caught up in the Act’s implementation will need to supply an alternative, TSA-approved form of ID as of October 20, 2018, such as a U.S. passport, U.S. passport card, DHS trusted traveler card or U.S. military ID. You can find a list of approved ID's on the TSA website.

The Real ID Act was initially passed over a decade ago in 2005 following the 9/11 Commission’s recommendation that the Federal Government set uniform national standards for state and federal ID’s such as drivers licenses. The Department of Homeland Security, however, didn’t release a concrete implementation timetable until January 2016, starting with initial public outreach and education in the form of in-airport signage and handouts.

The deadline for states to comply with the Real ID Act expired on October 10, 2017, but after reviewing extension requests from the states involved, the DHS has backflipped on its initial January 2018 deadline, extending the deadline out to the new date of October 20, 2018. There remain a few states under review, but at this stage, it's highly unlikely the DHS will pull the pin on those states, and an extension will be granted.

Drivers licenses and state ID from any state not granted an extension by the DHS will no longer be valid at check-in from the Jan 22 deadline, and residents will need to show an alternative, TSA-approved form of ID to board their flight.

What Can Residents Do to Prepare for the Changes?

The most important thing for residents of these states to address is to organize an alternative form of ID. If the DHS rejects your state’s application, and no extension granted past October 2018, you will need alternative ID to cross state borders. The TSA provides a list of ID they will accept online, but the most common and accessible are:

Children under 18 are not required to provide identification documents when traveling with a companion within the United States.

How to Obtain a DHS Trusted Traveller Card for Free

One of the fastest ways to comply with the new regulations, without having to get a passport to fly domestically, is obtaining a DHS trusted traveler card. Expedited security programs like Global Entry, TSA Pre✓®, NEXUS, and SENTRI provide a DHS approved Trusted Traveler card, accepted in place of your state ID or drivers license when the new regulations come into force. And the best part? Some of our favorite credit cards offer complimentary Global Entry or TSA Pre✓® membership:

The majority of these cards also offer travel credits, some form of lounge access, extensive travel insurances, and a host of other benefits that more than justify the annual fee.

If you want more details on the expedited security programs, we’ve put together a post covering the airlines and airports participating in TSA Pre✓®, along with some details on the cards offering Global Entry/TSA Pre✓® credits, to help travelers decide which card best suits their individual needs.

Situations like these can be frustrating. Due to the inaction of state governments involved, resident's will need to get another form of TSA approved ID to travel interstate, an unnecessary waste of time and money. An easy solution, however, is to utilize the Global Entry/TSA Pre✓® credit on the cards listed above to get a DHS Trusted Traveler Card.

This just seems like a game of chicken, and the TSA is flinching at every opportunity. Do we think the TSA is going to prevent all New Yorkers from traveling? No. With a national population estimate of over 323,000,000, do we think that the #3 (NY), #5 (Illinois) and #9 (Michigan) most populous states, which comprise over 10% of the total population, are going to be prevented from boarding a plane? Not. A. Chance.

Regardless, if you've got an opportunity to pick up a trusted traveler card at no cost, it'd be foolish to leave it on the table!

5 / 5 ( 7 votes )
Share this:
AwardWallet Tip of The Day
Did you know you can filter the accounts in your AwardWallet profile by program? If you want to view only a subset of your loyalty accounts tracked by AwardWallet, use the Accounts Filter to display only the accounts you're interested in at the moment. Show me how