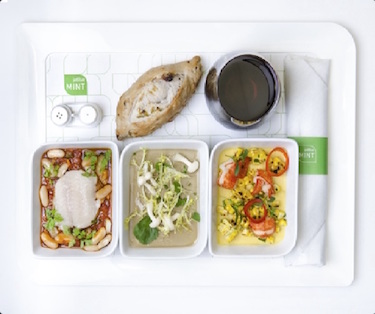 Nevertheless, many observers were surprised when discount carrier JetBlue introduced its premium Mint service on these routes in 2014 which includes lie flat seats, free high speed Wifi and entertainment, and premium meal service. In fact, Mint has been so successful that JetBlue is now beginning to offer service from Boston to both San Francisco and Los Angeles. In addition, it also offers Mint service on Saturday flights from New York and Boston to select Caribbean destinations. 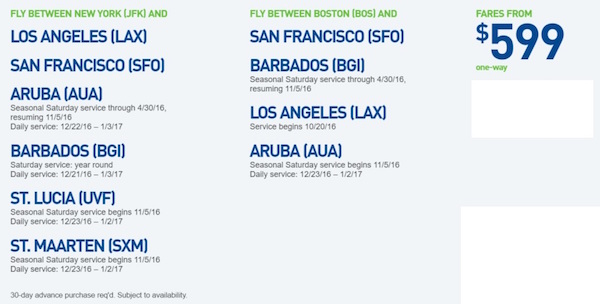 How Does Mint Compare?

I was onboard the inaugural Mint flight from San Francisco to Boston in March, and I was quite impressed by both the seats. There are four rows seats in the Mint cabin with rows 1 and 3 featuring two seats on either side, and rows 2 and 4 having a single seat on each side. In fact, these single seats even have a waist-high sliding door that can turn them into a sort of mini-suite.

Other features of the Mint seat include a message function, a 15″ monitor with 100 channels of DirectTV, and the ability to turn the seat into a lie-flat bed that's a full 6'8″ long. Power is supplied by dual 110 volt power outlets and two USB ports, so you can feel to charge up your laptop, tablet, phone and your spare battery pack, all at the same time! 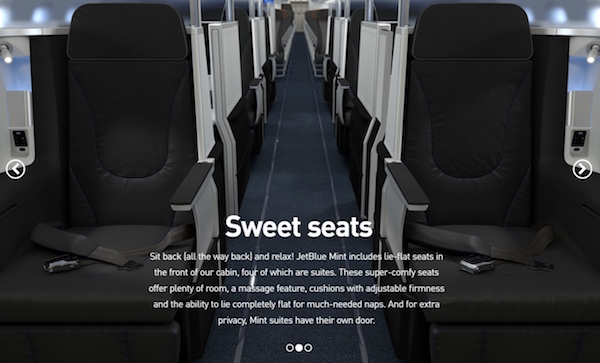 If this seat sounds unique, it's because it is. According to Danielle Sandars, Manager of Corporate Communications for JetBlue, the airline had the entire cabin custom designed rather than choose from the existing options offered to the airlines. As she puts it, ” From the general design of the seats and atmosphere, down to the details of the phone pocket near the outlets, our team was focused on highlighting JetBlue’s take on a traditionally stuffy first class product.”

It could be argued that it simply isn't worth paying hundreds of dollars more to sit in a special seat for a few hours, but the seat is only part of the Mint equation. Mint passengers also receive service that far exceeds what they can expect in most airline's economy class and even their international business class.

For example, passengers were greeted by name upon boarding, their jacket was taken and we were offered a pre-departure drink. The food is designed by Michelin starred chef's at New York's Saxon + Parole, and passengers have their choice of three small plates from a list of five that change each month. The most memorable dish I tried was a tuna tartare, and the current menu includes heirloom tomato salad, lobster risotto, and five-spiced braised short rib.

To be clear, these are all delicacies that you're unlikely to find in your typical domestic first class meals, and would be considered exceptional even for most international business class flights. 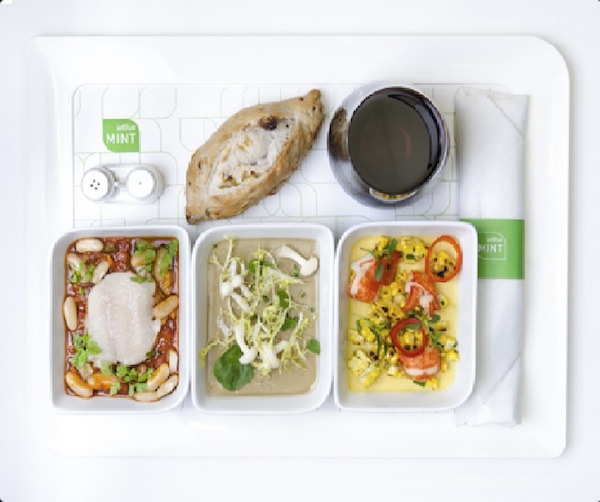 Finally, there are plenty of little touches that make Mint unique. For example, Mint passengers receive priority boarding, baggage delivery, and free high-speed Internet service. You also get a complimentary amenity kit from Birchbox in either men's or women's versions.

Is Mint service perfect? Of course not. Unlike all of its competitors for premium transcontinental flights, JetBlue doesn't offer any complimentary airport lounge access. In addition, only four Mint passengers on board will get to experience privacy of the suite, and sadly, I was not one of them.

But with transcontinental tickets starting at $599 each way, JetBlue's Mint service is not just the most luxurious and innovative domestic service offered, it's also a bargain.

5 / 5 ( 1 vote )
Share this:
AwardWallet Tip of The Day
Did you know that if someone else accesses your AwardWallet account, you will see an alert at the bottom of the page? Clicking that alert will show you all the current sessions accessing your account. If you see something that doesn’t make sense, you can log the other sessions out and change your AwardWallet password. We highly recommend enabling two-factor authentication on your account for increased security. Show me how