Aeroplan Program Changes: Everything You Need to Know

Full Refunds Within 24 Hours of Booking

You will now get a full refund of your miles and fees if you cancel your ticket within 24 hours of booking. For tickets booked at least seven days prior to travel, the U.S. Department of Transportation requires airlines to offer one of two options:

Aeroplan has long exploited an exception for third-party online travel agencies. The DOT rule applies to tickets issued by airlines serving the U.S. Aeroplan was in the unique situation of being a separate entity from the airline Air Canada, and thus didn't need to accommodate the 24-hour free-cancellation rule. But in November 2018, Air Canada closed a $450M deal to buy the Aeroplan program. We aren't sure whether the new policy is a customer-friendly move or forced compliance with U.S. law following the Air Canada-Aeroplan acquisition. Regardless, it's great news for frequent flyers. For bookings made over the phone, the $30 CAD booking fee remains non-refundable.

Cancellations / Changes Allowed Up To Two Hours Before Departure

Award tickets can now be canceled/changed for a fee at least two hours before departure. Previously, cancellations and changes were only allowed up to 21 days before departure. (Changes inside 21 days were possible before, but you needed to reissue a ticket with those miles within a year.) Now, after paying the fee, miles and taxes will be fully refunded to your Aeroplan account.

As shown in the chart above, fees for cancellations on the website range from CAD$125 to free depending on your elite status. Cancellations made over the phone are slightly more expensive, ranging from $150CAD to free, based on status.

Altitude Super Elite 100K is Aeroplan's highest elite status level. Members at this level now benefit from waived fees for changes or cancellations as long as they are made two hours before departure.

Aeroplan is “temporarily” suspending two types of awards so that it can “make important system upgrades to deliver better service and offer new, more flexible stopover options” in advance of the new loyalty program. Aeroplan states that only 0.3% of award tickets will be impacted.

Round the World (RTW) Awards

Previously, you were able to book RTW awards at the following mileage levels: 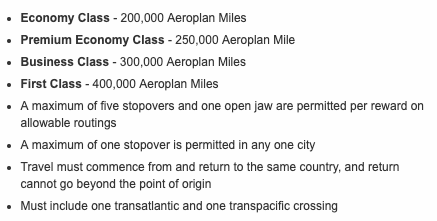 This change isn't that surprising since several airlines have done away with round-the-world (RTW) tickets. However, ANA still offers them, so you could still piece together a RTW trip. In fact, RTW awards from ANA are more flexible than those offered by Aeroplan, so this change isn't too terrible. ANA is a transfer partner of American Express, just like Aeroplan. So, if a RTW award was on your bucket list, it's still an option with ANA and for a much better rate.

The changes announced by Aeroplane are a mixed bag. It's nice that the positive changes go into effect immediately. As far as the negative changes go, there is still time to book travel before they take effect. Although Aeroplan says the changes are temporary, we're highly skeptical the old routing rules will be brought back in any way that resembles the current version. If RTW trips return, you can bet the pricing won't be the same.

The technology that manages award bookings is incredibly complex to build and manage. It seems doubtful they would go to the trouble to change routing rules temporarily. We'll continue to hope for the best, but you should probably put the claims about these changes being temporary into the fake-news category and book any RTW and/or creative roundtrips while you still can.

5 / 5 ( 9 votes )
Share this:
AwardWallet Tip of The Day
Did you know you can see individual transaction history for most of your accounts? Click the + sign next to an account and then view the History tab. Show me how