The newly announced partnership between Air France-KLM and Virgin Atlantic is now live! Two of the most easily accrued point currencies, Virgin Atlantic and Flying Blue miles, just became even more valuable. Among other new partner benefits, you'll now have the ability to book partner awards on either airline using the other's currency.

Here are a few key takeaways from the expanded partnership:

Cohesive Scheduling — All four airlines will coordinate with each other to provide “more convenient flight schedules” and to ensure “a smooth and consistent travel experience.” This includes the new ability to book flights on all operating carriers with each airline's respective website, mobile app, and travel agents.

Mileage Earning — Loyalty Program Members will now be able to earn redeemable and elite-qualifying miles for travel on “any of the four airlines' worldwide operations.”

Partner Redemptions — Loyalty Program Members will now have the ability to redeem their miles on “any of the four airlines' worldwide operations.”

Reciprocal Elite Benefits — Travelers with eligible elite status on any of these partners will now have reciprocal benefits honored, including priority boarding and access to “over 100 airport lounges when traveling internationally“.

How to Get Flying Blue and Virgin Atlantic Miles

Additionally, Flying Blue is also a transfer partner of Capital One, allowing transfers at a ratio of 1,000 Capital One miles to 750 Flying Blue miles.

Before I get into the comparisons and opportunities presented by this new partnership, I think it's important to remind folks of some of the quirks of booking with these programs, regardless of whose metal you're trying to fly on:

Virgin Atlantic has several newly-issued award charts for redemptions on their new Flying Blue partners, and goodness they are confusing. You can find the complete set of Virgin Atlantic award charts here, but for now, I'm going to focus on just a few of them.

Given the massive network Flying Blue currently operates in Europe, it's nice to see the possibility to fly short-haul for as little as 4,000 miles. Keep in mind, though, that there will be fuel surcharges/taxes tacked on to the mileage price. Given that airfare on ultra-low-cost airlines can be insanely cheap for intra-European travel, it's essential to make careful comparisons of the total costs. 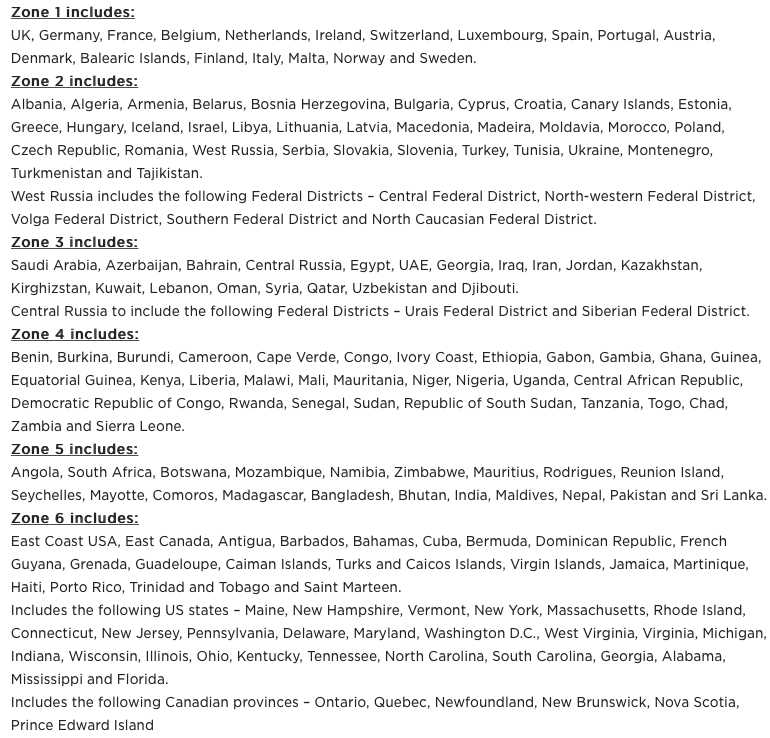 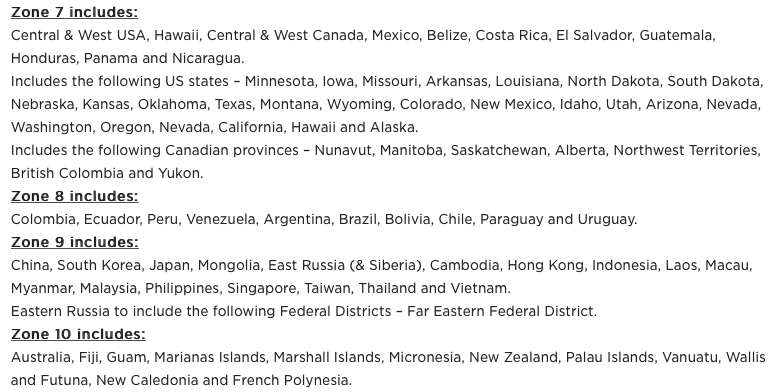 Considering that the Eastern U.S. falls into Zone 6 and that the Central/Western U.S. falls in Zone 7, you're looking at between 48,500 and 87,500 Virgin Atlantic miles (plus taxes) to fly to Western Europe in business class. That's not too bad, especially given Virgin's limited peak-pricing dates:

As I previously mentioned, Flying Blue does not publish an award chart. They utilize dynamic award pricing, and that makes it much more difficult to discern what their partner award pricing will be. I did some preliminary dummy searches on known Air France routes and found this:

As far as I could tell through my initial searches, this is about as low as award prices get for travel between these two regions. An itinerary coming back the opposite direction looks relatively similar:

As for you folks on the East Coast:

And traveling the opposite way:

It appears that “saver-level” pricing for direct Virgin Atlantic routes are around:

These prices are relatively standard compared to other trans-Atlantic options, but if you're like me, a couple of things immediately stand out:

To get a clear picture of how these programs compare, I did a lot of dummy searches. It’s clear that each program offers awards on more of their own flights than partner flights. However, when both programs offer redemptions on the same flights, there are some big opportunities to save cash or miles.

Virgin Atlantic's intra-Europe, short-haul award chart for travel on Air France/KLM is cheaper than booking directly with Flying Blue. This is especially true for European business-class (economy seats with the middle seat blocked off), where Virgin Atlantic can be less than one-third of Air France's price! 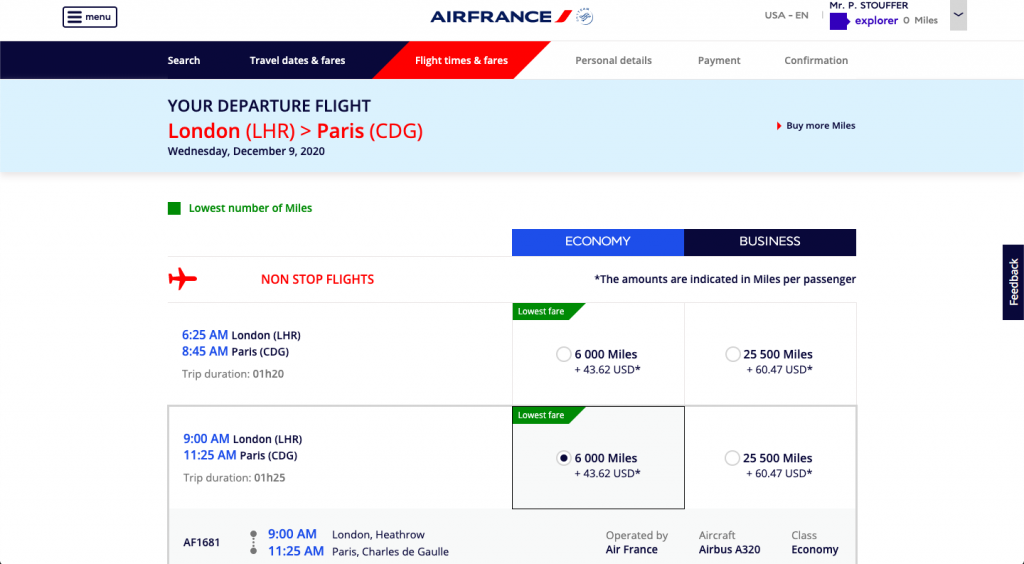 Virgin Atlantic strikes again with economy long-haul, trans-Atlantic redemptions. If you're willing to spend a little more on the taxes and fuel surcharges, it's possible to book the same flights (operated by either airline) with Virgin Atlantic miles for half of the “saver-level” price with Flying Blue miles.

The fuel surcharges that Virgin Atlantic charges for their own Flying Club redemptions in “Upper Class” are so ridiculous that I've never considered booking with them before. The new partnership with Flying Blue has just changed the game. It's now possible to book Virgin Atlantic business class through Flying Blue and only pay one-third of the fuel surcharges Virgin Atlantic would charge themself. Unfortunately, there's an ‘*' in this title for a reason: This only applies to trans-Atlantic itineraries departing from the U.S., not the reverse.

Historically, Virgin Atlantic has offered far better pricing for some Delta flights than Delta offers to their own SkyMiles members. For example, a business-class flight from Atlanta to Sao Paulo might cost 160,000 SkyMiles, but the exact same flight could be booked through Virgin Atlantic for only 45,000 miles. The same phenomenon seems to apply to certain Air France/KLM-operated flights.

For example, this itinerary (operated exclusively by Air France) from Porto, Portugal to San Francisco is only available through Virgin Atlantic. You can’t book the exact same flights with Flying Blue miles—even at a higher price.

The only option with Flying Blue miles for the same date is operated by Skyteam partner Air Europa via Madrid.

While researching this new partnership, my biggest disappointment was the complete lack of premium economy award availability; I never found a single bookable seat. Perhaps there was a glitch in the rollout of the partnership, and the inventory will show up later. In the meantime, if anyone has been able to find premium economy award availability with either a Flying Blue carrier or Virgin Atlantic using the other's online award search engine, please let us know in the comments.

This seems like a great partnership that's going to benefit a lot of people. I'm sure those who are loyal to either of these programs will be excited about the additional redemption options, as well as the notion of having their elite status benefits reciprocated.

Virgin Atlantic and Flying Blue are two of the easiest point currencies to earn. The new ability to use miles from both programs to book flights operated by Air France, KLM, and Virgin Atlantic is a huge win—without any obvious downside. I'm just curious to see what the future holds for premium economy awards.

Have you found any exciting opportunities with this new partnership? Please let us know in the comments.