Here's what you need to know about this new Alaska Mileage Plan redemption option — and what's still to come from Alaska's Mileage Plan as it continues to integrate its new Oneworld partners.

Alaska Airlines Mileage Plan uses a unique award chart. Rather than using the same award chart for all partners, Alaska has different redemption rates and rules for each airline partner. This can lead to wildly varying rates on the same route depending on which partner airline you fly. Some Mileage Plan redemptions can be incredibly lucrative, while others are far too pricy to consider booking.

By focusing on the excellent redemption options, you can get some incredible value. In fact, Alaska Mileage Plan miles have the highest average redemption value of the 12 airline programs that we have analyzed — with a whopping 4.46¢ per mile average value. That's buoyed by the massive 5.67¢ average redemption rate for long-haul business and first-class awards.

However, not all combinations of these regions are allowed. Instead, Alaska only allows award flights on Royal Jordanian to be booked between the following regions at the following rates (one-way):

Unfortunately, like Alaska's recently-added Royal Air Maroc award flights, this is a rather disappointing award chart.

Comparison to Other Award Rates

Alaska Mileage Plan is the newest way to redeem miles for Royal Jordanian flights, but it's far from the only option. You can redeem any Oneworld airline's award miles for award flights on Royal Jordanian. So, let's compare how Alaska compares to other options.

Let's start with an award between New York (JFK) and Amman (AMM):

As you can see, Alaska Mileage Plan isn't competitive for this route. If you're booking one-way economy awards, you can do better booking using British Airways Avios. For one-way business class awards, you'll want to book through AAdvantage for 70,000 miles each way. If you have Japan Airlines Mileage Bank miles, you can score a great deal at just 50,000 miles round-trip in economy or just 100,000 miles round-trip in business class.

Royal Jordanian doesn't operate many routes into Africa. But let's look at how Alaska Mileage Plan compares for awards from the U.S. to Tunis, Tunisia: 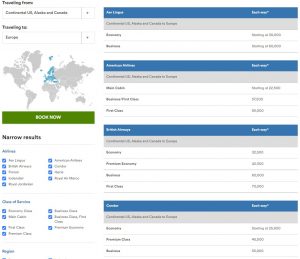 The advantage of using Alaska miles: Mileage Plan members can book a stopover in Amman at no additional cost. For those that want to see both Jordan and a second destination, Alaska Mileage Plan could be the cheapest option.

Since joining the Oneworld alliance, Alaska has added redemptions on the following Oneworld airlines:

And Alaska still shows that award travel is “coming in 2022” for the following airlines:

You can now use Alaska Mileage Plan miles to book awards on Royal Jordanian… but this isn't a tempting option. Just as it did for recent award chart additions for Royal Air Maroc and Iberia award flights, Alaska simply set the price too high. Unless you want to maximize your Alaska miles with a free stopover in Jordan, you'll likely want to use your Alaska miles to fly other partners.