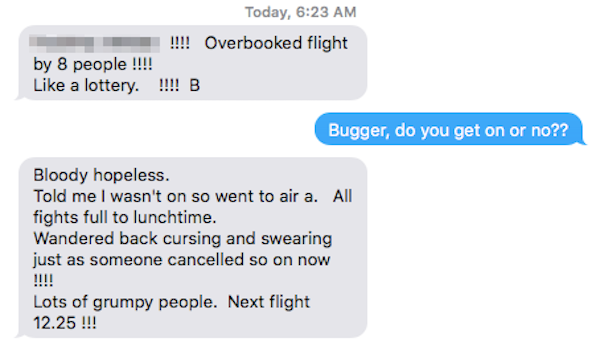 Flight Overbooked? Know Your Rights When Getting Bumped!

Arriving home after dropping my Dad at our small regional airport in the pre-dawn chill this morning, I had taken one sip of coffee when the first text message arrived.

I've blanked the first words out to make it a little more internet friendly, but it's self-explanatory that he was less than impressed. We had already set his flight routing to almost double the non-stop distance to his destination to get him there on time.

The idea that he might get bumped to a later flight, missing his connecting flight in the process and not arriving at his destination until late this evening, didn't sit well. While he was one of the lucky ones that eventually got on the plane, it did get me thinking about the rules around voluntary and involuntary denied boarding, or ‘getting bumped.'

Why Do Airlines Overbook Planes In The First Place?

While it may sound like a shady business deal for an airline to sell more tickets for a flight than the plane has seats, it is standard practice for almost every carrier worldwide. It is so well-established in fact, it even has legislation setting out the level of compensation passengers receive when they are involuntarily denied boarding.

Airlines want their planes full, so the reasoning behind overbooking is that every flight that gets booked to capacity will have a certain number of no-shows or people that don't show up. Passengers that have missed a connecting flight, or the flight was delayed, caught in traffic or sleeping in; the airline digs into historical data for each flight to determine the average cancellation rate, and uses that information to determine if they overbook the flight and by how many people. The problem occurs when everybody shows up on time — passengers get bumped.

Are You Required To Accept A Later Flight When A Plane Is Overbooked?

The Department of Transport (DOT) dictates that when an airline overbooks a flight, they need “to ask people who aren't in a hurry to give up their seats voluntarily, in exchange for compensation.” So, when the airline knows it has oversold a flight, ground staff are directed to find passengers that are willing to give up their reservation for a later flight plus compensation of either flight vouchers or cash.

You are under no obligation to accept the offer but if you do, be careful to nail down these details mentioned on the DOT website.

Additionally, the airline is required to advise passengers who volunteer to be bumped the compensation to which they would be entitled. Compensation can include flight vouchers, cash, flight upgrades, hotels, and meals.

What Are Your Rights If You Are Involuntarily Denied Boarding

The airline must give you a written statement defining your rights and an explanation of how it was decided that you were the one to get bumped. If you are involuntarily bumped, you are almost always entitled to compensation; the amount depends on the cost of your ticket and the length of your delay. Below is a summary of the conditions from the DOT website where you can view the full list.

There are also a few circumstances where you will be refused compensation. These we have cut directly from the DOT website so that you understand them in their entirety.

The rules on oversold flights only apply to aircraft with more than 30 seats, which are not charter planes, and don't apply in the situation where a smaller plane has been substituted for the original aircraft due to mechanical issues. Additionally, if passengers are denied boarding for weight or safety reasons on aircraft between 30-60 seats, they are not entitled to compensation.

These rules are only applicable in the U.S. The E.U. has its set of compensation laws.

Rates of involuntary denied boarding have been dropping steadily due to refined practices and predictions, with the national rate for all major airlines combined now down under 1/10,000 passengers. If you are unlucky enough to be the passenger at the bottom of the list it pays to know what you are entitled.

In the case of a voluntary bumping, if you have the time and don't mind taking a later flight, it can be quite a profitable exercise. Depending on when your reconfirmed flight is, you may also be entitled to hotel accommodation, transfers, meals, and possible flight upgrades — never be afraid to ask.

5 / 5 ( 2 votes )
Share this:
AwardWallet Tip of The Day
Did you know that you can group different travel segments into a single travel plan? You can then share this trip with anyone. To do this use the Create Travel Plan link.  You can move the beginning and end sections of the travel plan by dragging and dropping. Show me how