IHG Rewards Launches Dynamic Award Pricing in the U.S. and Beyond

Over the past few years, many hotel loyalty programs have adopted some sort of variable award pricing. Hilton's award nights are fully dynamic priced, while Marriott adopted peak pricing in September 2019. Hyatt planned to launch peak pricing on March 22, 2020, but delayed the introduction to 2021 due to COVID-19. Even Wyndham moved to a three-tier award structure in April 2019.

The last major holdout was IHG Rewards. With only a couple of exceptions, reward nights at all 5,900 IHG properties cost the same no matter the day of the year. However, that's no longer the case. An IHG Rewards spokesperson confirmed to AwardWallet Friday morning that IHG “began extending dynamically priced Reward Nights to more hotels around the world this week.”

IHG Rewards says that “with this program update, the number of points required for members to redeem a Reward Night will now flex up and down, just like cash rates for room bookings.” However, it doesn't explicitly say that award rates are tied to cash prices.

Is This Bad News?

Not necessarily. A lot of hotels that I'm finding are pricing at cheaper rates than under the dynamic award pricing than at their prior set rates. For example, let's take a Saturday night in Atlanta during the upcoming Fourth of July weekend: 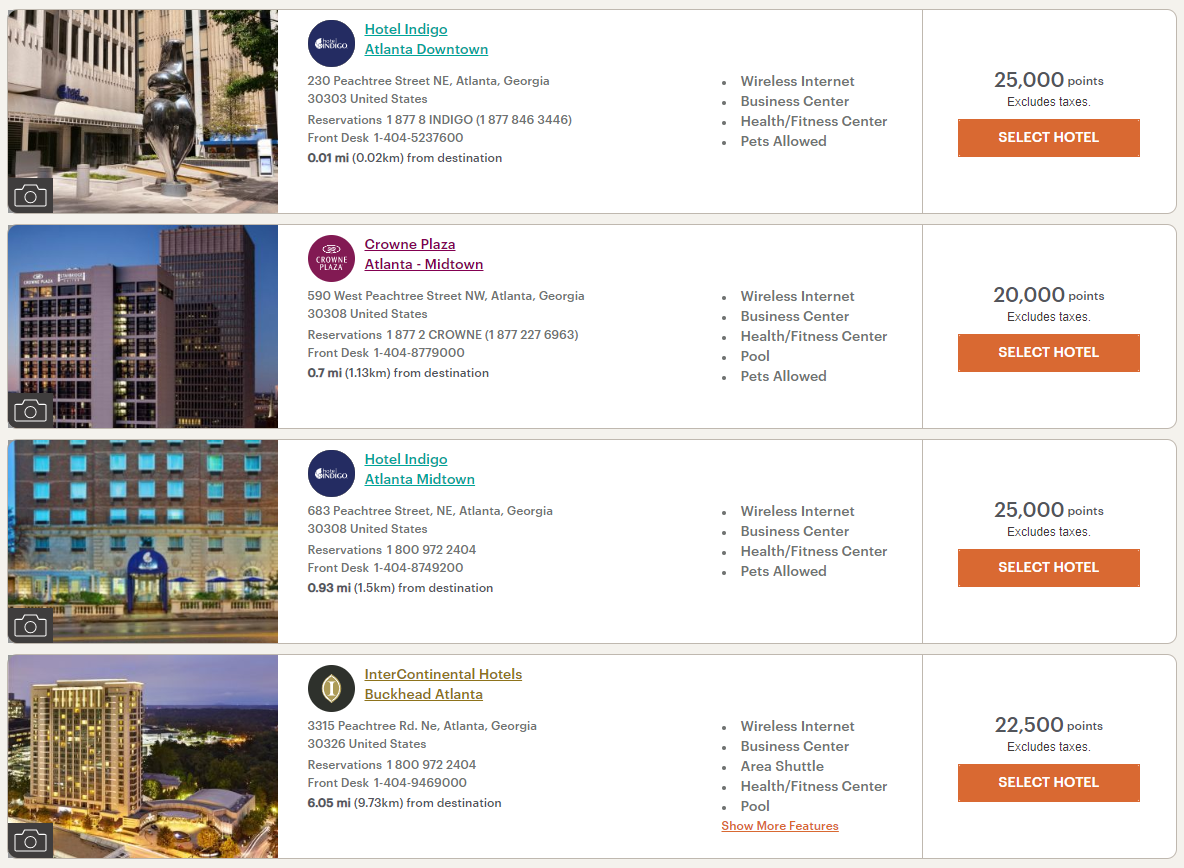 That's a solid slate of excellent hotel brands all costing 25,000 points or less. Under the prior static award pricing, these hotels cost:

That means under dynamic award pricing some nights at these hotels are pricing half of their previous rates. 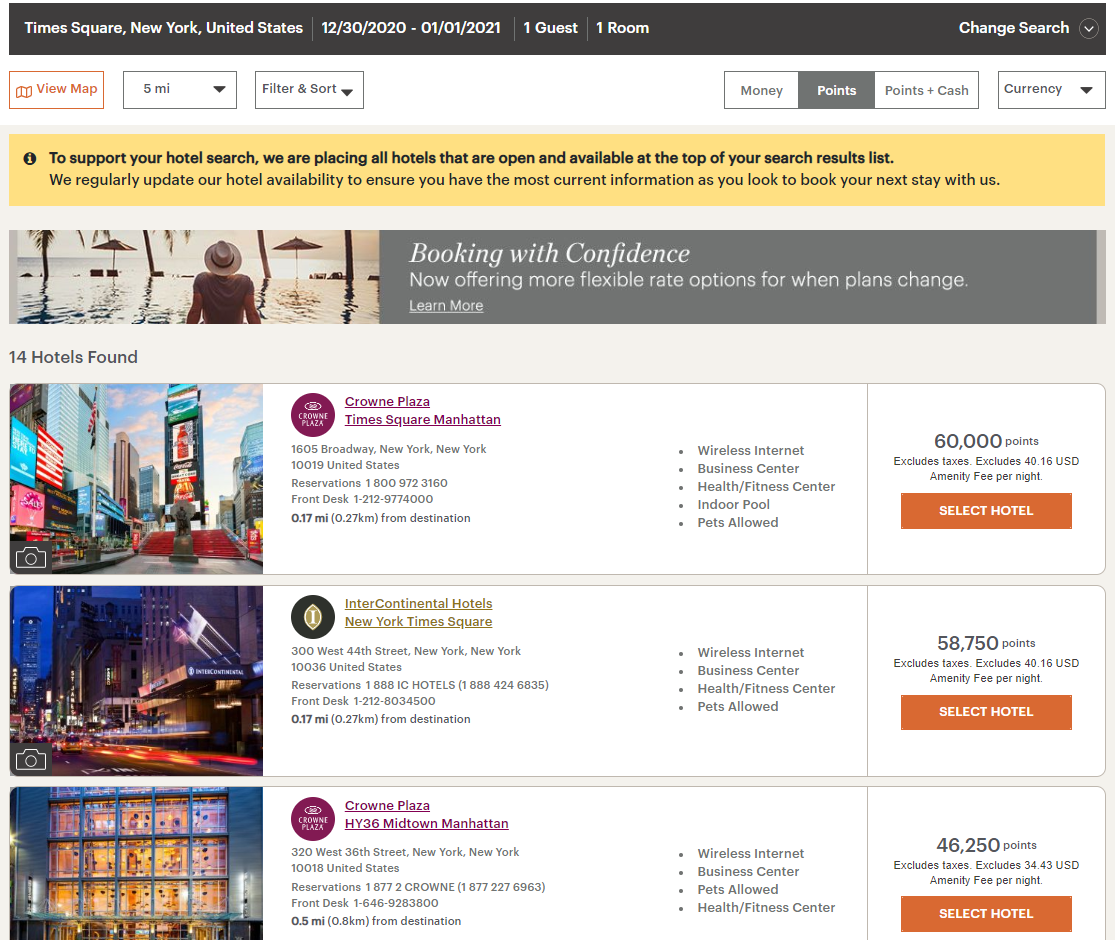 IHG's dynamic award pricing has been a long time coming. In its 2018 investor report, IHG told investors that it was “testing new features for 2019 roll-out, designed to increase member engagement with variable point pricing.” In a statement to TPG in February 2019, an IHG spokesperson confirmed that it expected “a roll-out later this year and will share additional details as they become available.”

In mid-2019, IHG added properties in Macau with reward rates higher than its previous 70,000-point maximum. Some nights at the new InterContinental hotels cost 75,000 points while some peak nights were priced at 100,000 points per night. However, IHG didn't rollout any other dynamic award pricing in 2019.

On April 23, 2020, IHG launched dynamic award pricing in the China region. Around the same time, I noticed that the Staybridge Suites Atlanta Perimeter Center in Atlanta was being dynamically priced. IHG confirmed that this hotel was “part of the test group for dynamic pricing.” That hotel—and seemingly the rest of the test group—were returned to static award pricing that same day.

Now, in late May 2020, IHG is starting to roll out dynamic award pricing to an unspecified number of hotels throughout the U.S. and around the world.

Before the rollout of dynamic pricing, it didn't matter which of the four nights was discounted to zero points, as all nights cost the same amount. With the rollout of dynamic award pricing, we were curious if IHG would continue to make the fourth night free. Or, would IHG's free night policy mirror Marriott's fifth-night award free perk where the cheapest night is discounted?

Before logging into my account, I checked a four-night stay in Atlanta over the Fourth of July weekend. The average award nightly rate at the Hotel Indigo Atlanta Downtown is 24,375 points. That's a total of 97,500 points before the fourth-night award free: 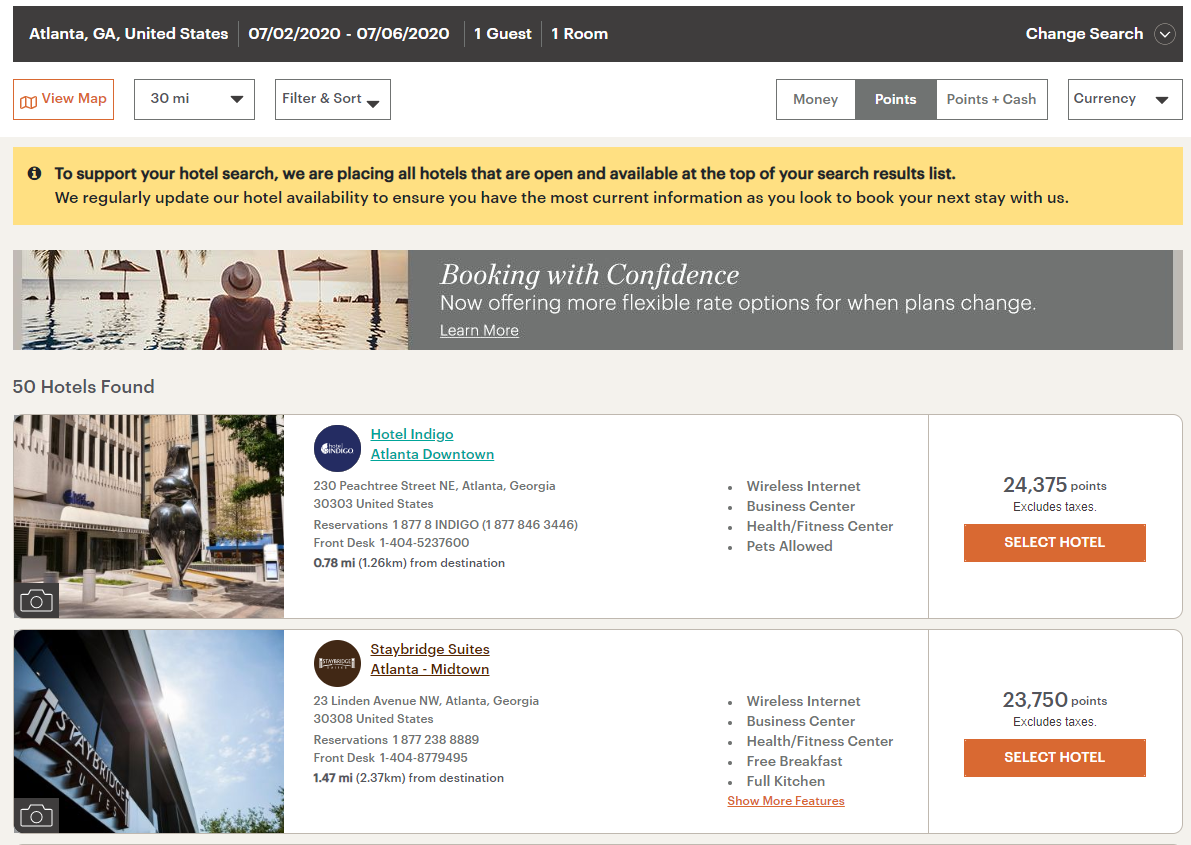 After logging into my account, I clicked through to the confirmation page. There you can see clearly that the fourth night has been marked down to zero. 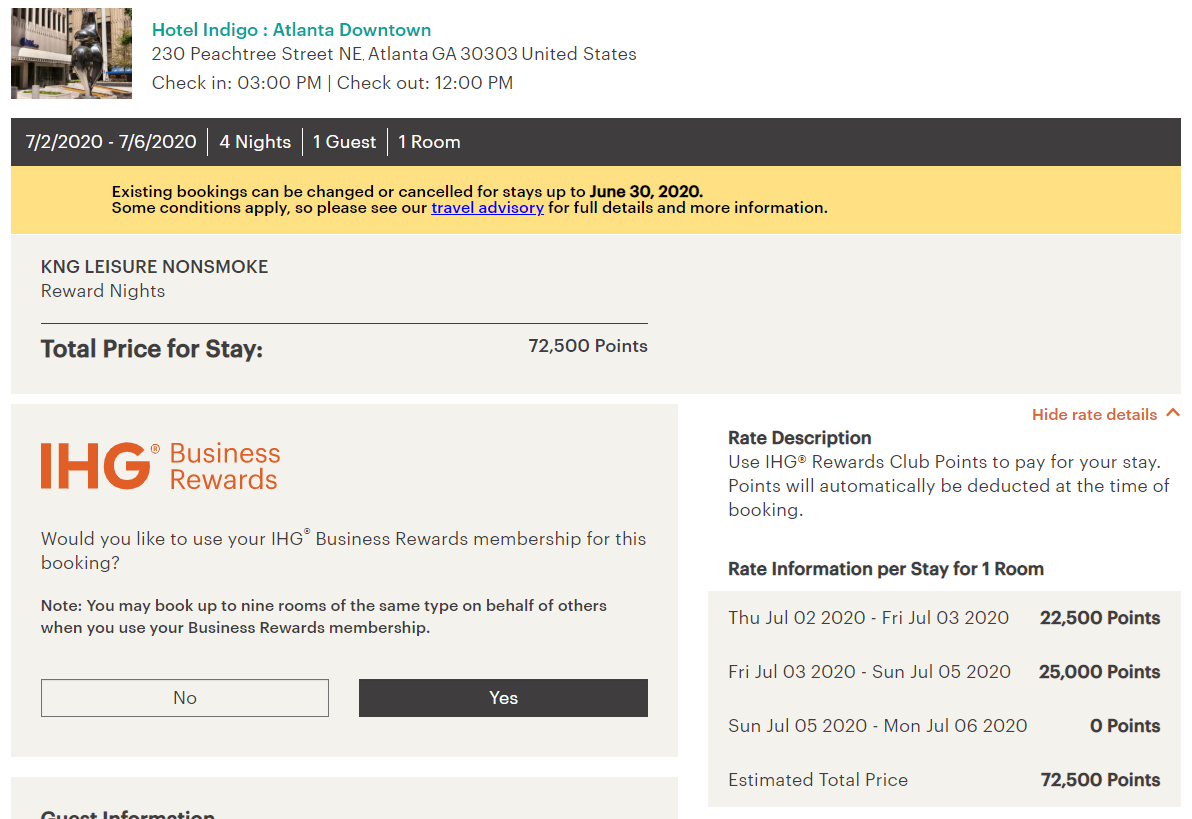 Doing some reverse math on the award pricing for this four-night stay, we can see:

This means cardholders will still get the fourth night free, even if there's another night that's cheaper. However, this isn't always going to work out in your favor.

For example, the Staybridge option in the example above averages 23,750 points per night for a total of 95,000 points before a fourth-night free discount. In this case, the fourth night you're getting for free is at the cheaper rate of 22,500 points: 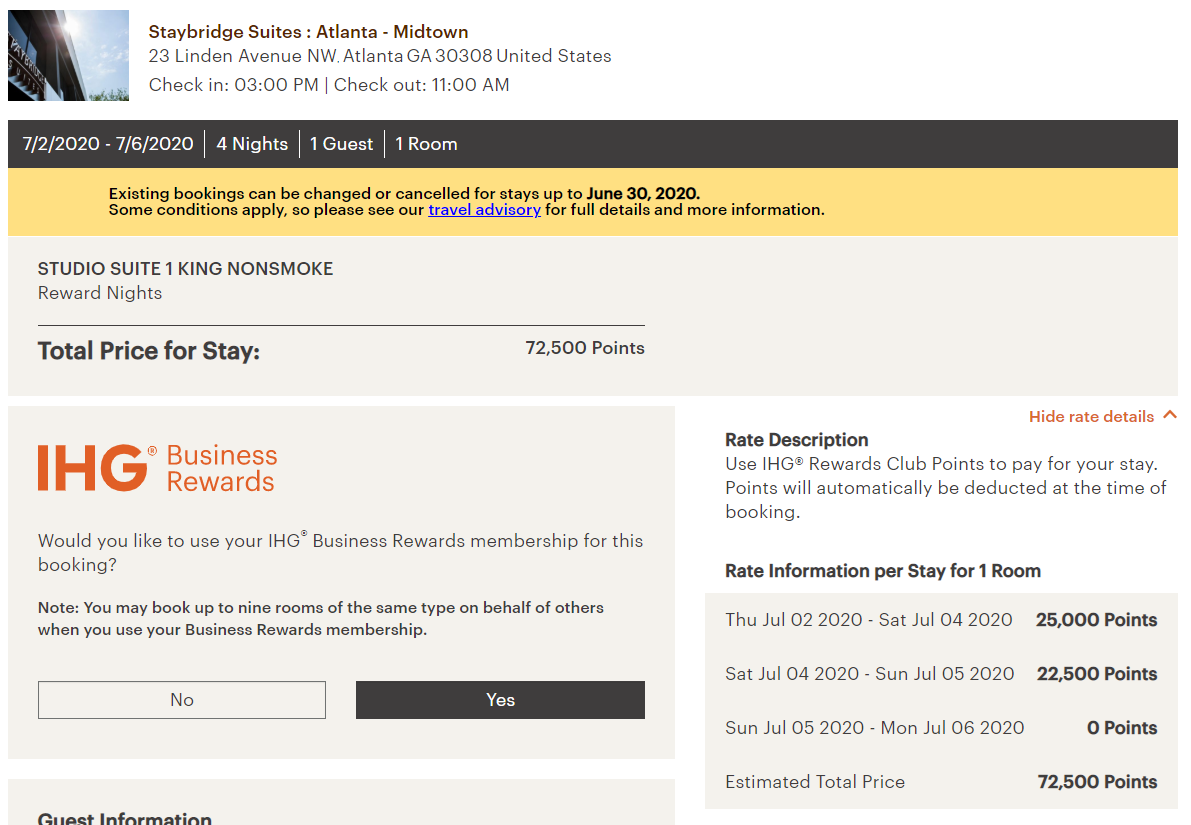 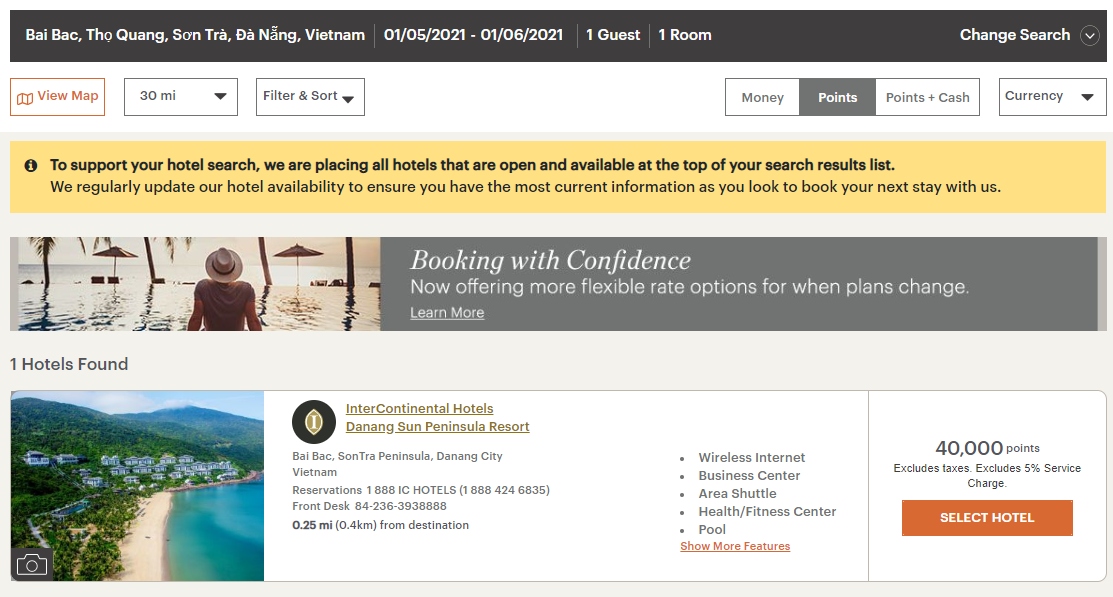 When I search for this same night using one of my IHG Rewards Premier Card free night certificates, it's showing as free: 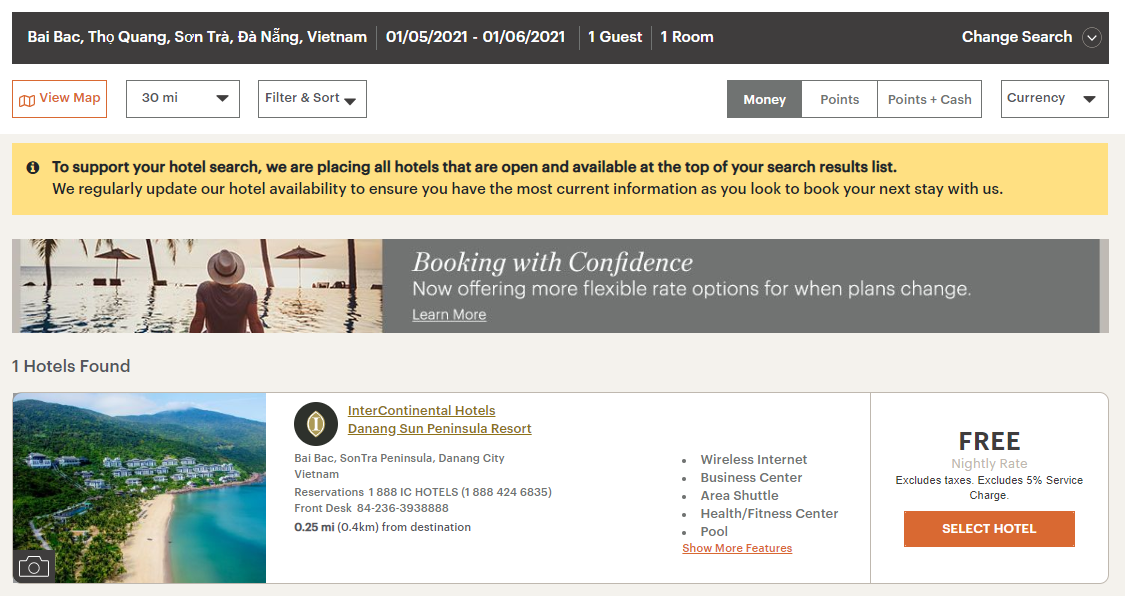 Well, almost free. The confirmation shows a strange charge of just 5¢ after taxes and fees: 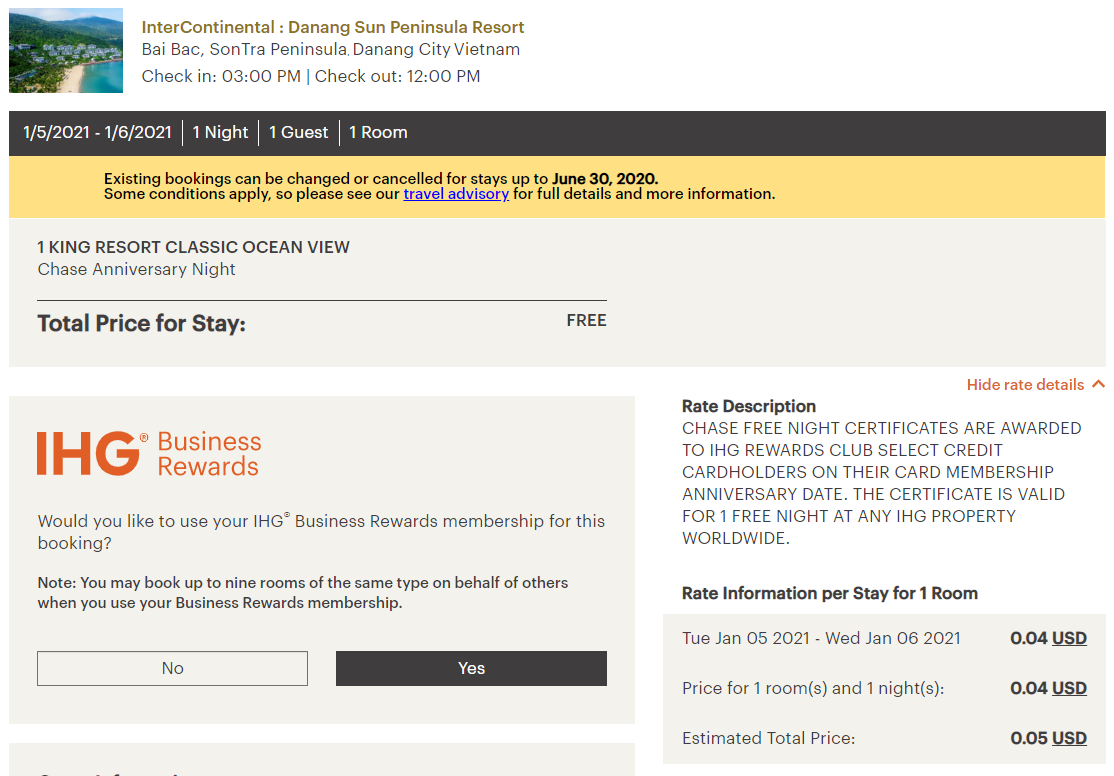 As part of IHG's COVID-19 response, any free night certificates set to expire between March 1 and December 30, 2020, have had their validity extended to December 31, 2020. Also, all new certificates issued in 2020 have an 18-month validity.

If you don't have the IHG Rewards Premier Card yet, you can still get a whopping 140,000 bonus points after spending $3,000 on purchases in the first 3 months from account opening. And as you can see above, those points stretch further than before.

The earning for spending at IHG hotels breaks down as follows:

For now, IHG Rewards' dynamic award pricing seems like nothing but a positive. All hotels that we have checked so far are pricing at or lower than the static award pricing those hotels previously had. That means that your IHG Rewards points just got a bit more valuable. If you have upcoming award reservations, you should check current pricing and rebook if the price has dropped.

However, that doesn't mean that this will remain good news. Right now, many hotels are in bad shape due to COVID-19. Lower award prices is one way that IHG can help fill hotel rooms. Once travel returns to normal, we are sure to see the dark side of dynamic award pricing.