Interesting New Routes in August 2019 and Beyond

We're excited to report that several new flight routes have been recently announced. It's always interesting to see new destinations from airlines, not only for encouraging tourism but also for maintaining competition to keep prices fair. In addition to giving you more options for paid airfare, new routes are always a great opportunity to snag hard-to-find award availability before the rest of the points and miles community catches on.

Turkish will also be changing the aircraft serving their Atlanta and Washington D.C. routes. The 787-9 Dreamliner, which includes an all-new business-class product, will begin service from Istanbul on the following dates:

The introduction of a snazzy new business-class experience on such a long route is a good decision by Turkish Airlines. According to the airline, “the new aircraft will offer passengers refined comfort during the longest journeys across 311 destinations in 124 countries.” A nice perk is that Turkish Airlines is part of Star Alliance, so award booking options to try out the new plane should be abundant, especially using United, Avianca or Aeroplan miles.

On Sale: Emirates to Barcelona and Mexico City

Emirates is a transfer partner of Amex Membership Rewards, Capital One, and Marriott Bonvoy. You can also book Emirates flights using Alaska MileagePlan.

Air Italy announced that it will once again run its seasonal service between Milan (MXP) and Los Angeles (LAX), San Fransisco (SFO), and Toronto (YYZ), from March 29th, 2020 through October 24th, 2020. Flights between MXP and SFO, and MXP and LAX will operate four times per week. Service between MXP and YYZ is scheduled for six flights per week. Air Italy already provides year-round service from Milan to both New York (daily) and Miami (five flights per week).

The carrier has a partnership with British Airways, allowing travellers to earn and redeem BA Avios on Air Italy flights. Although redeeming with Avios sounds appealing, be warned: award tickets on BA include hefty surcharges—especially on premium cabin redemptions. Because BA's award chart is distance based, some of these award tickets don't match up very well on price when compared to bookings through other loyalty programs.

As seen below, an Air Italy flight between San Francisco and Milan is 31,000, Avios points + $205.70 in taxes in Economy, and 92,750 Avois + $548.70 in business class. Still, if you aren't able to find award space on another airline, these flights could mean the difference between using points and buying a flight with cash. With the current 40% transfer bonus from Amex Membership Rewards to British Airways, these tickets start looking much more reasonable. 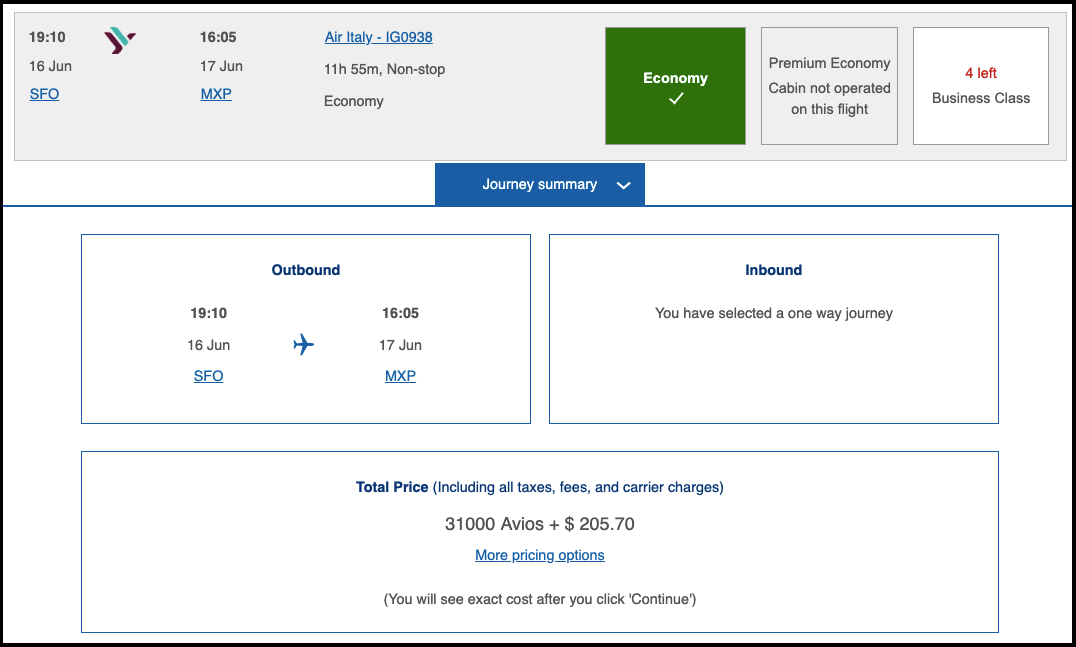 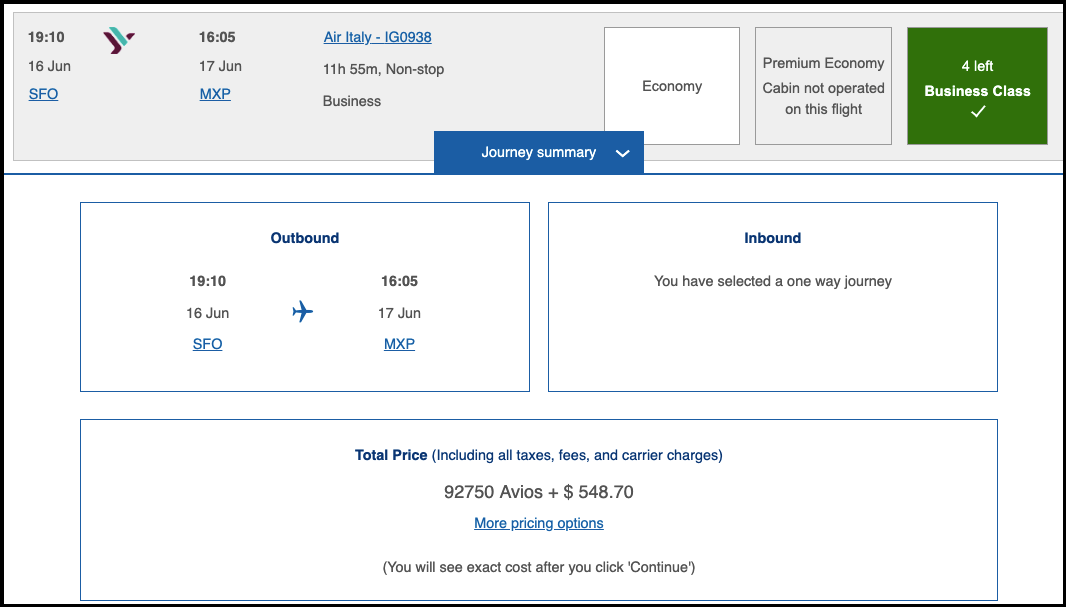 Air Italy is privately held and in 2018, Qatar Airlines acquired a 49% stake in the airline. The purchase was a strategic step, given Qatar's desire to increase airline traffic through Milan—a major business hub that is underserved by airlines. Qatar hopes to benefit from the revenue boost by turning Milan into a more prominent hub.

Akbar al Baker, CEO of Qatar Airlines, is hopeful that eventually Air Italy will join Oneworld. Currently, Oneworld lacks a hub in central Europe, so the addition of Air Italy would be beneficial to the alliance. If that happens, passengers could look forward to booking award tickets through American Airlines, which has much better redemption rates than BA for transatlantic travel from/to Europe.

On Sale: Swiss Airlines to Japan and Washington DC

Currently, there is no nonstop service between Zurich and Osaka, so Swiss is opening up a brand new opportunity with this route. Swiss will use the A330 airplane for this route, and service will commence on March 1st, 2020. Meanwhile, the Zurich-Washington D.C. flight will begin on March 29th, 2020, and will be serviced by the A340 aircraft. New flight times are as follows:

Swiss Airlines is part of Star Alliance, which allows for plenty of redemption and earning opportunities. Given the long distance flown between these two new destinations, travelers will have plenty of opportunities to rack up frequent flyer points on revenue tickets.

Transfer of flights from Narita to Haneda
Delta has announced that as of Spring 2020, it will transfer all its flights from Tokyo Narita airport to Haneda airport. The change makes a lot of sense given that Narita is heavily serviced by ANA (United partner) and Japan Airlines (American partner). Because Delta has no SkyTeam affiliate at Narita, it's difficult to compete with the other U.S. carriers on connecting flights. By moving to Haneda, Delta will be the “largest” U.S. carrier flying into the airport and offer a key point of differentiation; Hanada is far more convenient for those traveling to downtown Tokyo.

Delta already has two flights into Haneda: from Minneapolis and Los Angeles. The airline will reroute its existing flights from Seattle, Detroit, Atlanta, Honolulu, and Portland (Oregon) to the new airport. After the shift, Delta will offer seven daily flights from the U.S. into Tokyo. The following cabin experiences will be available on Delta flights: 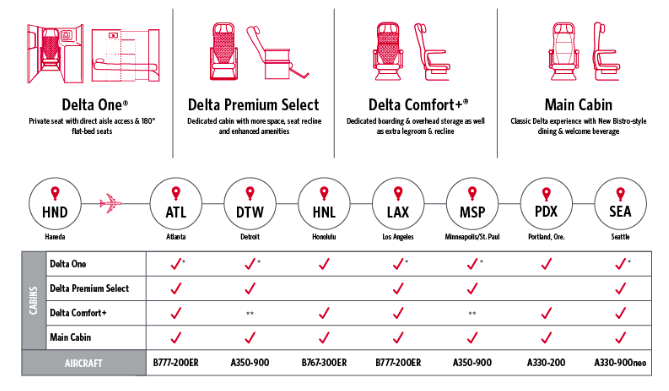 Stronger reliance on Korean Air (SkyTeam and JV partner)
Delta is suspending nonstop service from Narita to Singapore (as of September 22nd, 2019) and from Narita to Manilla (as of March 2020). Passengers who want to travel to Singapore will be able to do so through Seoul via Korean Air, Delta's SkyTeam partner. For flights into Manilla, Delta will commence nonstop daily service on its own metal from Seoul.

Delta is able to leverage and strengthen its new Joint Ventures (JV) Relationship with Korean Air (announced in March 2018) by introducing Seoul as the connection point into Manilla and Singapore. Given the new JV, it's no surprise that Delta is dropping the Narita flights. While the loss of these two nonstop routes out of Narita might frustrate some passengers, the JV with Korean Air should introduce many more flight options.

Flights transiting through the U.S. pose an annoyance to many passengers. The U.S. requires that many foreign travelers (depending on nationality) obtain a visa if they have a connecting flight in the U.S. Having to deal with a visa application for a simple flight connection can be a deterrent for many. Luckily Canada does not require a visa for connecting flights. For this reason, adding in a flight through Vancouver can entice many flyers.

There is no word on when this potential route will be launched. However, on July 10th, Air France and Air Tahiti Nui were approved for a license with the Canadian Transportation Authority to transit through Canada for this specific route.

It's great to see the addition of new routes by all these carriers. I'm also curious to see how Delta's strategy shift in Asia will affect its overall presence in the region. Which of these new routes are you most excited to try? Are you sad to see Delta eliminate service from Tokyo to Singapore and Manilla? Tell us below in the comments!

5 / 5 ( 7 votes )
Share this:
AwardWallet Tip of The Day
Did you know that for each airline within one of the global alliances you can view the balances across all carriers in this alliance? Click the alliance icon in the list of accounts next to any airline in an alliance to see the details. Show me how 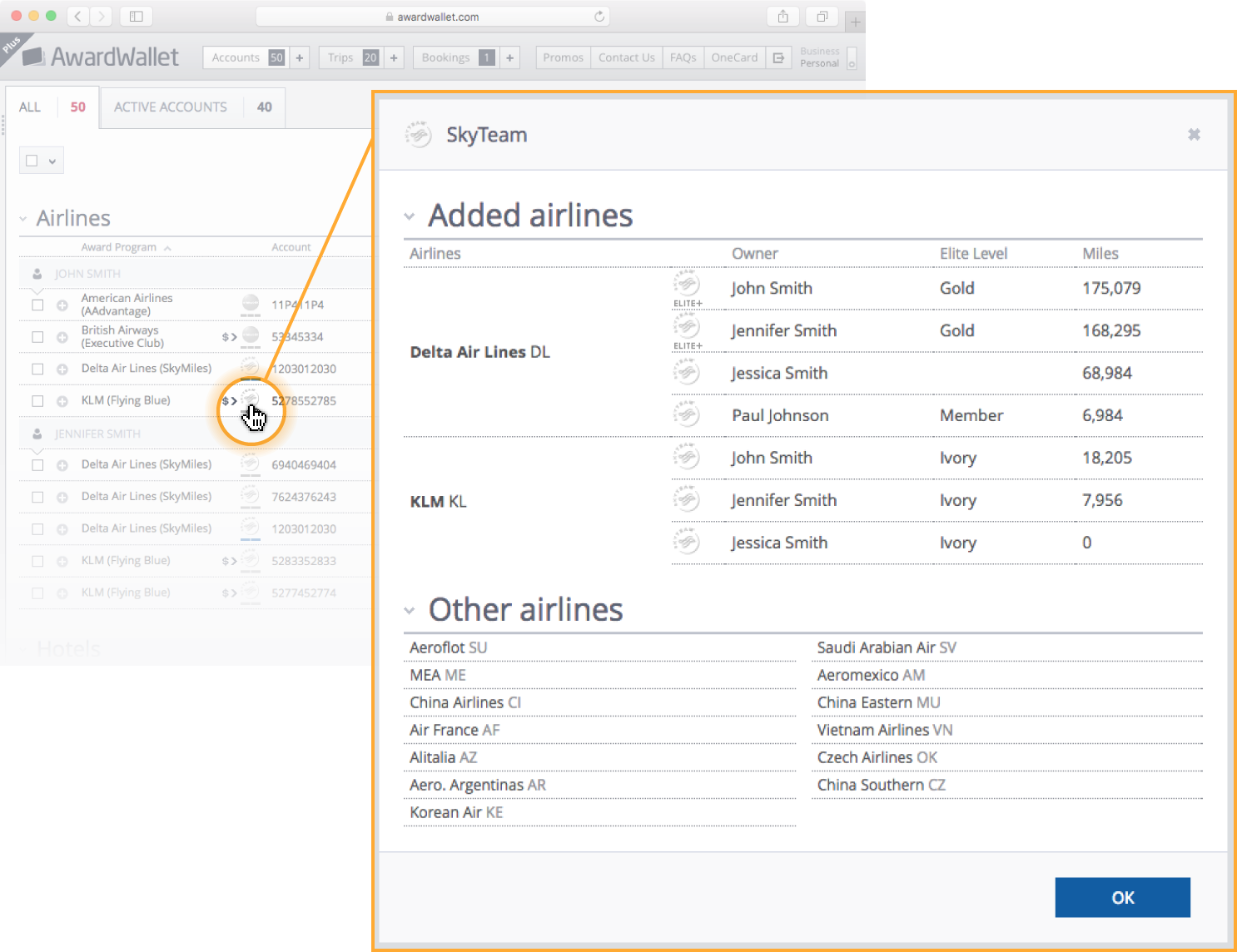