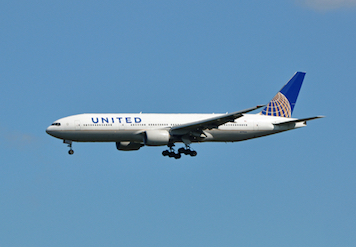 United is running an award sale on roundtrip saver-level economy awards to North Asia and South Asia whereby you can save 17,776 miles person. This sale is only valid for awards originating and terminating in the U.S. (excluding Hawaii) or Canada. Bookings must be completed by August 22, 2016, while travel can take place between August 29, 2016, and December 8, 2016, and between February 4, 2017, and April 30, 2017, to be eligible for this promotion. 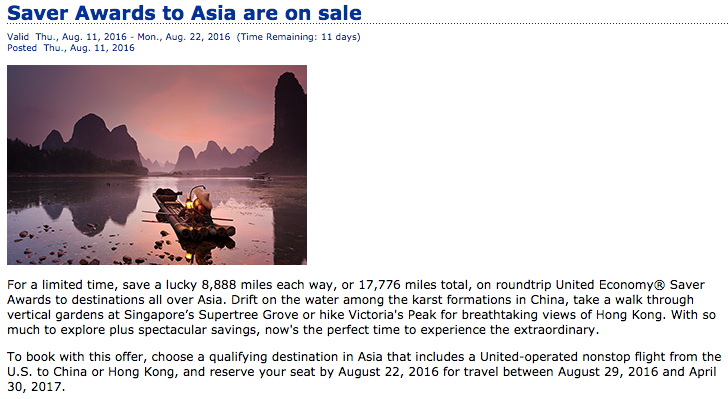 How to Take Advantage of the Promotion

To leverage this promotion, your itinerary must include a nonstop flight segment between the U.S. and China, including Hong Kong, that is operated by United. That means that you can connect within Asia with a United partner, such as Asiana, Singapore Airlines, or THAI Airways, but the transpacific flight must be operated by United.

According to United's award rules:

How Much of a Discount Is This?

Economy class saver level roundtrip awards originating in Mainland U.S., Alaska & Canada to North Asia typically require 70,000 miles per person. With this sale, you can book such an award for only 52,224 miles, representing a savings of approximately 25%.

On the other hand, economy class saver level roundtrip awards to South Asia typically require 80,000 miles per person. And with this sale, you can book such an award for only 62,224 miles, which represents a savings of approximately 22%.

One-way awards or itineraries that include a leg outside the valid dates are not eligible for this promotion. If you book one leg of your trip at the saver level and the other at a standard level, the saver leg will receive a discount of 8,888 miles or 50% of what the discount would have been if both legs had been booked at the saver level.

United has been generous lately as they are also currently running an unannounced sale for domestic saver level roundtrip awards.

Keep in mind that United is a Chase Ultimate Rewards transfer partner, so if you are short of the miles required to take advantage of this sale, you can transfer your Ultimate Rewards to United instantly at a 1:1 ratio in 1,000-point increments. If you already have a trip booked that would have qualified for such a discount, it never hurts to call up and ask to see if they'll honor the promotion for your itinerary.

5 / 5 ( 4 votes )
Share this:
AwardWallet Tip of The Day
Did you know that with a wide display you are able to expand the AwardWallet window to see the Last Updated column? You can easily see the last time your balance was checked by AwardWallet. Show me how