The latest round of devaluations targets redemptions on Alaska Airlines and other Singapore Airlines non-alliance partners:

The new award pricing takes effect on August 1, 2022. So, now is your last chance to book Alaska partner awards with Singapore KrisFlyer and lock in the old pricing before the devaluation comes in next month.

Economy awards are increasing across the board. Let's compare the new award chart… 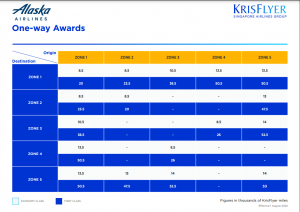 … with the with the older one: 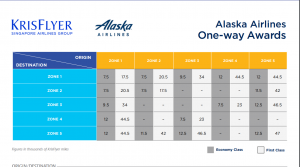 First-class award pricing increases are much more variable than the economy increases:

No Changes to U.S. Award Zones

Singapore KrisFlyer splits the U.S. into 5 zones to account for the country’s size. For example, Zone 1 covers the West Coast — such as California, Oregon, and Washington. Meanwhile, Zone 5 covers Alaska and Hawaii. Fortunately, Singapore Airlines has not changed its U.S. zoning — which can be a sneaky way to increase the cost of awards.

Singapore is also devaluing its pricing for Virgin Atlantic awards and Virgin Australia awards. Both will come into effect alongside the Alaska Airlines award chart changes on August 1, 2022.

Again comparing the new Virgin Atlantic award chart to the old one and a substantial devaluation is clear. Some KrisFlyer awards are increasing by a whopping 18%.

The most popular Virgin route is between North America and Europe, which are taking a substantial hit. KrisFlyer is increasing Virgin Atlantic awards as follows:

Singapore awards on Virgin Australia metal have also increased, although the increases do not seem to be as sharp as with other partners. Which perhaps reflects the fact that the awards were already expensive. Comparing the new award chart, which comes into force from August 1, 2022, to the old chart, some modest increases exist.

Singapore KrisFlyer already charged steep rates for Virgin Australia flights between the U.S. and Australia. But these are about to go even higher. Much of this is a moot point as Virgin Australia contracted to a regional airline during the pandemic.

However, if Virgin Australia resumes flights to the U.S., you'll have to pay even more miles to fly between the U.S. and the Australia 1 region — which includes most major Australian cities, including Sydney, Melbourne, and Canberra:

In late June 2022, Singapore announced a devaluation to awards on its own metal and those on Star Alliance partners. The new pricing came into effect on July 5, 2022. While the devaluation was not too bad, it still represented an increase of around 10% across the board.

Singapore introduced a new award chart that took effect on July 5, 2022. Across the board, most awards saw increases in the region of 10%, although some were a little more, especially in premium cabins.

Comparing the new chart to the older award chart and the latest pricing for some of Singapore's most popular routes are as follows:

Awards from the U.S. East Coast to Singapore (Zone 1 to Zone 13)

Awards From Europe to Singapore (Zone 1 to Zone 11)

While all the awards have increased in price, some of the Singapore KrisFlyer sweet spots have remained relatively intact. Historically one of the best uses for KrisFlyer miles was for an award from the contiguous 48 states to Hawaii aboard partners United. Awards from North America to Hawaii have changed as follows:

Not surprisingly, Singapore looked at its stopover policy and thought it was too generous… so it devalued it too!

Historically you could have long stopovers (over 30 days), and you could pay a $100 fee to have a long stopover without incurring any additional cost in miles. For instance, booking a flight from London to Sydney via Singapore with a 4-month stopover in Singapore.

Sadly, this is no longer the case. Starting August 1, 2022, stopovers over 30 days will no longer be allowed. You will have to book two separate awards if you want a more extended stopover.

If you want to use your miles to upgrade your ticket, these costs are also increasing. Using miles to upgrade already provided poor value. You are better off booking a straight cash ticket or straight miles award.

When you compare the new upgrade cost to the older upgrade chart, you see how expensive the costs are in the first place, and you are better off not wasting miles on upgrades.

Award devaluations are a normal occurrence. Generally, not a year goes by without an airline deciding to strip some value from its program and squeeze its customers a little more. So, this move by Singapore Airlines comes as no surprise. This is especially true when you factor in that this is the third year in a row where the airline lost money, including a record loss of $3.2 billion from 2020 to 2021.

Devaluing your award chart is a great way for airlines to improve their profit and loss by charging more. At the end of the day, customers are trapped as they can't take their miles to another airline. So, customers have to pay higher rates or, worse, wait and watch their miles expire.