In an email to members of its Velocity frequent flyer program, Virgin Australia announced United Airlines as its new partner. This means the end of Virgin Australia's long-standing partnership with Delta Air Lines. The airline is giving a few months of notice. So, there may be things you need to get in order before June 13, 2022. Here are the details.

Way back in 2009, Delta started daily flights from Los Angeles to Sydney as part of its new partnership with Virgin Australia. The airlines formed a joint venture for travel across the Pacific Ocean, allowing customers to book one ticket that would cross the ocean and continue with a domestic flight on the partner airline.

The United States Department of Transportation approved this joint venture in June of 2011 — allowing the airlines to extend codeshare operations and offer reciprocal benefits to frequent flyers. In 2015, the Australian government re-approved this alliance. The authorization lasted until 2020.

In 2017, Virgin Australia also formed a partnership with Air Canada.

Why Virgin Australia is Switching Partners

During the Covid-19 breakout, Australia closed its borders. Virgin Australia focused on the domestic market and got rid of its long-haul fleet. Additionally, Delta was forced to suspend flights to Australia. Thus, the airlines ended the joint venture in September of 2020. Also in 2020, Virgin Australia entered financial restructuring and was sold.

As part of its restructuring, Virgin Australia decided to work with a new transpacific partner: United.

What This Means for Travelers

The most obvious change is that those traveling from North America to Australia and wishing to make a domestic connection will not be able to do so when flying on Delta Air Lines. This is a big loss for Delta passengers since the airline has no partners in Australia going forward–thus no ability to offer onward connections after its passengers arrive in the country.

For Virgin Australia's customers, this allows continued access to routes in Norther America — though these customers already had this access with Delta and Air Canada. For United flyers, there is new access to domestic flights in Australia.

“We will be working closely with Delta over the coming months to smoothly transition our Velocity partnership and all bookings will still of course be honored when Delta customers fly on Virgin Australia.”

Tickets are valid for one year for anyone who has a ticket containing Virgin Australia plus Delta Air Lines flights. Date changes will continue to be permitted during the one-year validity of tickets. However, any other changes must be done before the partnership ends. And it's anyone's guess how easy it will be to find seats when changing your dates after the partnership ends. 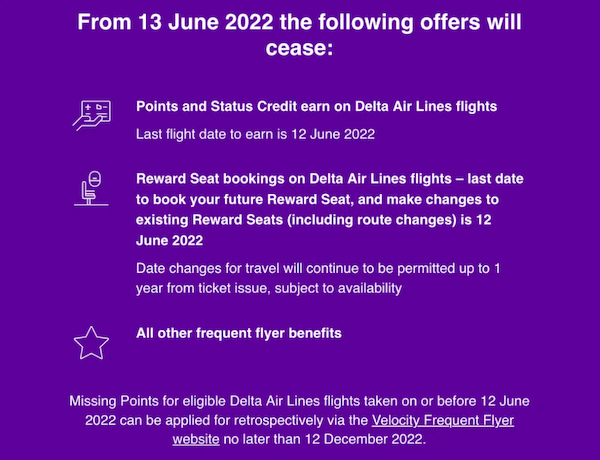 In an email to Velocity members, Virgin Australia shared the above graphic. It shared some key highlights:

Virgin Australia will say goodbye to its long-time partner Delta and start a new venture with United Airlines. This new partnership starts in April 2022. However, the Delta partnership will not end until June 13, 2022. That gives flyers about 10 weeks of overlap. Use this time to get things in order, make any necessary changes to tickets, and submit requests for flight credits. After the middle of June, the only U.S. airline partner for Virgin Australia will be United.

What do you think about this change? Have any bookings you'd like to make with the new partnership?