Air Tahiti Nui is adding a second destination for flights in the U.S. and launching a partnership with Alaska Airlines. This will provide extra flights between Tahiti in the U.S., plus connections to domestic flights.

Additionally, Alaska Airlines MileagePlan members will benefit by earning (and eventually redeeming) miles on Air Tahiti Nui. However, these new additions are being phased in over the next few months. Here's what this new partnership means for you.

The flights are operated by Boeing 787-9 Dreamliners. The Air Tahiti Nui website provides the following pictures of travel cabins:

This new route is a big deal for the airline, as it's just the fourth destination that the airline will operate from Papeete (PPT). Along with Los Angeles (LAX), Air Tahiti Nui operates nonstop flights from Papeete to Tokyo (NRT) and Auckland (AKL).

As of April 1, 2022, Alaska Airlines Mileage Plan members can earn miles on paid flights with Air Tahiti Nui. Mileage earning rates are published here and are shown below:

As of now, it's not possible to redeem Alaska Airlines miles for flights on Air Tahiti Nui. Award charts should come within the next few months. Given that some of Alaska Airlines' recent partner award chart additions leave a lot to be desired, we'll have to wait and see what the award pricing is on these before deciding if they're worth using your miles.

If you don't want to wait until Alaska Airlines publishes an award chart for Air Tahiti Nui (or if it comes out and is bad), you can redeem American Airlines AAdvantage miles for flights on Air Tahiti Nui. You'll pay the following for a one-way award (MileSAAver pricing) from the Continental U.S. to the South Pacific:

For cheaper rates, use AAdvantage miles to fly Air Tahiti Nui between Papeete and Tokyo: 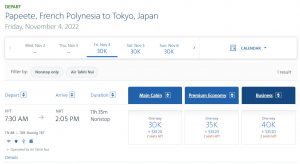 AAdvantage awards on the flight between Papeete and Auckland are even cheaper:

Air Tahiti is adding its second destination in the U.S. and launching a partnership with Alaska Airlines. It's probably not a coincidence that these announcements come together, since Air Tahiti Nui will now fly to Alaska's main hub in Seattle. This is in addition to existing, daily Air Tahiti Nui flights to another Alaska Airlines hub at Los Angeles.

Mileage earning rates for Alaska's frequent flyers are available starting in just a couple days. Award charts for redemptions on Air Tahiti Nui flights using your Alaska miles should be available in the coming months.

Are you excited about this new partnership? What are your thoughts?