Let's dig into this new award redemption to see if it makes sense for when you need to fly Malaysia Airlines.

You can now redeem Alaska Mileage Plan miles for Malaysia Airlines award flights between Asia and the following regions:

As you may have noticed, North America isn't listed. That's because Malaysia Airlines doesn't fly to North America. So, U.S.-based travelers will only find this new redemption option useful while traveling on Malaysia's route network.

Alaska is one of a few airlines that uses a different award chart for each partner airline. That means you can get incredible redemption rates on some partners — and poor redemption rates on other partners. Unfortunately, this new partner falls in the latter category.

Comparison to Other Airline Award Rates 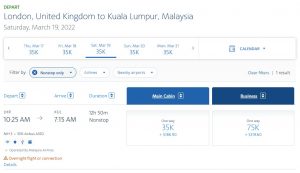 That means you can pay 150,000 AAdvantage miles roundtrip to fly Malaysia Airlines business class between London and Kuala Lumpur. But Alaska is now charging 175,000 miles one–way on the same route. 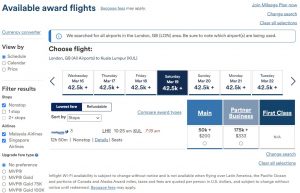 Award rates to the Middle East and South Pacific are similarly deficient.

And American Airlines isn't even the cheapest option. If you're flying roundtrip and have Japan Airlines Mileage Bank miles, you can pay just: 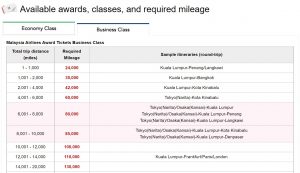 2022 has already been quite a busy year for the Alaska Mileage Plan program. Although Alaska joined the Oneworld alliance on March 31, 2021, it only added award redemptions on Qatar Airways in 2021.

Rounding out the bad news: Alaska recently unveiled it would increase some first-class award rates in March 2022.