Since joining the Oneworld alliance almost one year ago, Alaska Airlines has added award redemptions on most of its new Oneworld partners. After adding Qatar Airways, Iberia, Royal Air Maroc, Royal Jordanian, and Malaysia Airlines, Alaska is down to just a couple of partners left to add. And we don't expect Russian-based S7 Airlines to be added anytime soon.

That made the next addition for using your Alaska miles pretty predictable: SriLankan Airlines. After being disappointed by recent award chart additions, we were curious to see if SriLankan would provide any more value. And we are pleasantly surprised by what we found.

Here's what you need to know about Alaska's new award redemptions on SriLankan Airlines.

Alaska Mileage Plan uses a different award chart for each of its partner airlines. That means you can pay different mileage rates on the same route depending on which airline you're flying. Also, award prices are only published for specific region pairings. For SriLankan Airlines award flights, you can use Alaska miles to book between the Indian Subcontinent and the following regions:

SriLankan doesn't fly to North America, and Alaska doesn't allow members to combine partners on the same award. So, these Mileage Plan awards on SriLankan are only going to be useful when you're flying within SriLankan's route network.

Because Alaska uses different award charts for each partner, you can get excellent value on some partner airlines (e.g. Cathay Pacific) and poor value on other airlines (e.g. Royal Air Maroc, Royal Jordanian, and Malaysia). After recent disappointments, we are happy to see a reasonable award chart for SriLankan Airlines award flights.

If a region pair isn't listed, you can't book award flights between those regions when using Alaska miles — even if SriLankan sells tickets on the route. For example, you can't use Alaska miles to book SriLankan flights from Europe to the South Pacific. Because of how Alaska set up its SriLankan award chart, you'll need to originate or terminate in the Indian Subcontinent. Thankfully, that includes in-demand places like the Maldives.

No matter where you fly, remember that Alaska allows free stopovers on eligible one-way awards. That means that you can visit Colombo for as long as you want — whether that's two days or two weeks — before continuing onward.

Let's take a look at which awards you might want to book using these new rates.

Europe to the Maldives

Alaska's award chart for SriLankan flights prices awards between Europe and the Indian Subcontinent at:

So, let's take that to the max with a flight from London through Colombo to Male, Maldives. Pricing it out on Alaska's website, we find these rates — but also some hefty taxes and fees. Thanks to the high taxes and fees flying out of London, you'll need to pay $198 out-of-pocket for an economy award and $331 for a business class award. 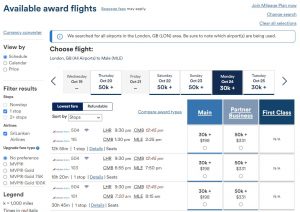 Instead, fly out of Paris or Frankfurt for the same mileage cost and significantly lower taxes and fees. From Paris, you'll pay $77 one-way in economy or $138 one-way in business class: 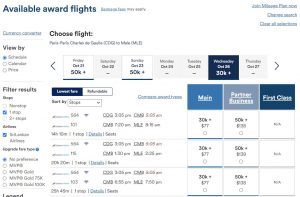 India to the Middle East 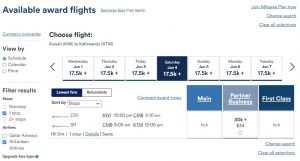 Keep in mind that Qatar Airways also operates many of these routes. While the economy award price is the same (17,500 miles), you'll need to pay 40,000 Alaska miles for business class awards on Qatar Airways vs. 30,000 on SriLankan Airlines.

Comparison to Other Airline Award Rates

SriLankan Airlines has been a member of the Oneworld alliance for years. That means you can use airline miles from any other Oneworld airline to book SriLankan Airlines award flights. So, let's see how Alaska's award rates stack up against our other options, starting with a nonstop flight from London to Colombo, Sri Lanka:

Add in a stop in Colombo on the way from Europe to another destination in the Indian Subcontinent (e.g. Maldives) and only the British Airways price changes:

Alaska has added redemptions on the following Oneworld airlines since joining the alliance in March 2021:

Alaska shows that award travel is “coming in 2022” for the following airlines:

Unfortunately, it hasn't all been good developments. As of March 1, 2022, Alaska increased first-class award rates on some Alaska-operated flights.

After a string of disappointing award charts for other partners, we were prepared for disappointment yet again from Alaska's award chart for SriLankan Airlines. Thankfully, this didn't end up being the case. There's certainly value to be found in using your Alaska miles for SriLankan flights.

American Airlines AAdvantage beats out Alaska for several awards. But the ability to book a free stopover when using Mileage Plan miles makes it the winner if you want to maximize your redemption. The only catch: SriLankan doesn't fly to North America. So, for many readers, you'll need to work these redemptions into a larger trip.