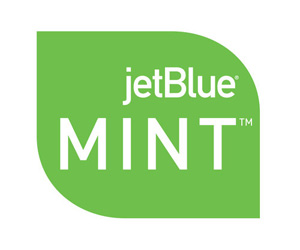 Stepping assuredly into the uncertainty left by Alaska Air's takeover of Virgin last week. JetBlue is putting its best foot forward, announcing a significant expansion of its Mint premium service. 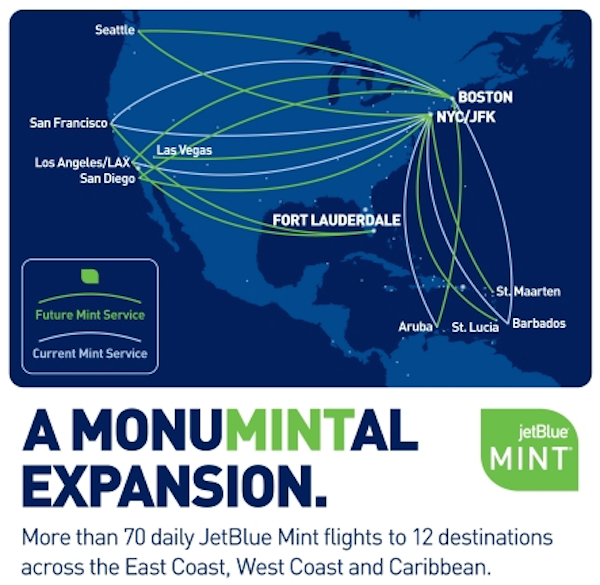 The new stops on the Mint radar will be paired up:

It's a smart move from JetBlue. Following the introduction of Mint's premium trans-con service in 2014, there has been high demand from business travelers and the service is getting rave reviews.

While Mint still has plenty of room for improvement (they don't yet offer complimentary lounge services on the ground for starters), Mint's in-flight experience is a significant step up from current First-Class offerings from United, Delta and American on domestic route. And, after opting out of the battle for Virgin America, Jetblue making a direct play for the hip Virgin crowd while the future of Virgin's current in-flight offerings is not apparent, is a shrewd move.

It is also another firm step away from JetBlue's humble low-cost beginnings. Leaving the coach-only philosophy firmly in its wake, nine of JetBlue's new A321's, scheduled to land 2017, will be constructed to Mint Business Class specs and also include an enhanced experience for all passengers with some great upgrades for the back end of the plane.

Features of the A321 core interior include 10-inch television screens with free entertainment, comfortable seats with the most legroom in coach and power outlets accessible to all customers.

The first of the new itineraries will begin flying in the first quarter of 2017 with new routes continuing to launch into 2018 as new aircraft arrive.

It's great to see JetBlue offering up a different experience from the big domestic players. One of my fears with Alaska buying Virgin was the watering down of the in-flight experience across the board; it takes smaller players putting a unique take on the flying experience to give the established airlines a shake up.

And whether they respond with better in-flight offerings or lower prices to compete with what JetBlue is doing, these are good things for flyers.

You can read our intro to the JetBlue True Blue loyalty program here.

5 / 5 ( 1 vote )
Share this:
AwardWallet Tip of The Day
Did you know that you can download a list of all of your loyalty accounts into a single Microsoft Excel file? Show me how