Continuing our series on loyalty program sweet spots, this week we’re shining the light on another foreign carrier, All Nippon Airways (ANA), and its rewards program Mileage Club.

The first big stumbling block for many points and miles fans trying to understand ANA Mileage Club is the multiple award charts. Mileage Club made the change from distance-based to zone-based awards back in 2015, however, still retains distance based charts for domestic and round-the-world awards.

We’ve written an in-depth post to help members understand ANA’s complex award charts, routing, and stopover policy which is a great place to start if you’re new to Mileage Club, and also a guide on how to book ANA awards which will help with the practical side of booking awards.

Yes, but the rules differ between ANA awards and ANA partner awards which we cover in the post linked above. In short:

When booking an open jaw at your destination, the cities must still be within the same ‘Area,’ which leaves open some fantastic routing opportunities when you consider the world is only broken up into 3 Areas.

When you book an open jaw returning to a city other than your departure city, the two cities must be in the same country. The trick here is that the US and Canada are considered ‘one country,’ as is all of Europe if you are traveling outside of Europe.

Extracting maximum value from ANA Mileage Club is as much knowing which partner to choose as knowing where you want to fly. ANA passes on carrier-imposed surcharges from the majority of partner awards, with the exception of Air New Zealand, Air Canada, Etihad, Hawaiian, and United.

If you’re chasing the sweetest awards from North America to Asia, you can’t go past ANA. We’ve chosen New York—Chengdu as our example, but you can apply this award to Hong Kong, Taipei, The Philippines, and a good portion of China. 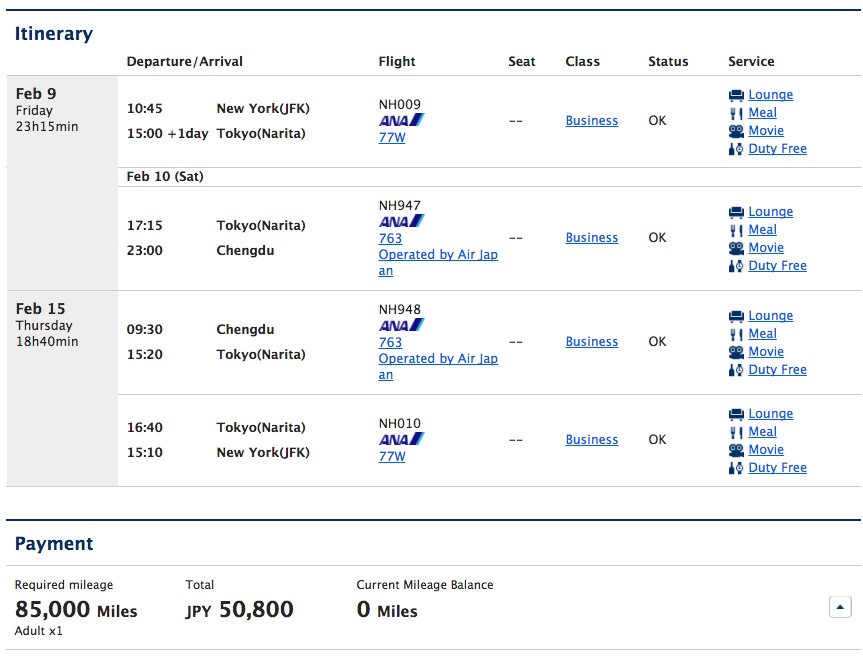 We pulled this example for a couple of reasons:

Again, ANA offers the best fares you’re likely to find flying North America to Japan. It’s worth remembering that ANA treats all of North America as one country as far as awards are concerned so this award is also good north of the border. 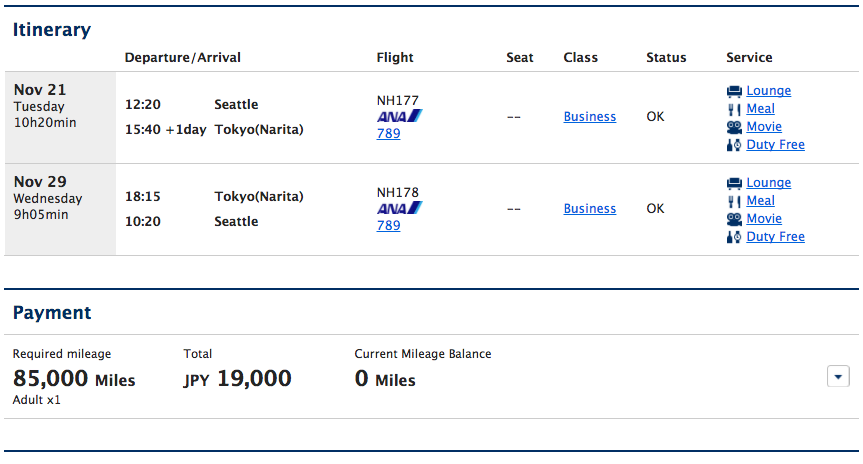 Round-trip in economy starts at 40K in low-season, 50K for regular-season, and 55K for high-season awards, with business awards pulling 75K/85K/90K respectively.

If you were paying cash to fly ANA business on this route, it would cost a touch under $7,500, with an 8.6¢/mile return.

At just 110K for a round-trip award, Asia 2 is another attractive option with ANA. Remember, this is an award that Delta bumped up to 95K each way at the end of 2016, so 100K/110K, even with carrier-imposed surcharges is still good.

Asia 2 includes other hard to get to gems like Indonesia (bring on the rainforest villa in Bali!), Cambodia, Nepal, Laos, Maldives, and Vietnam, and some more obscure destinations which include Kazakhstan, Turkmenistan, and the Kingdom of Bhutan.

United is one of the few airlines with whom ANA doesn’t pass on carrier-imposed surcharges, which makes partner awards to Europe top value. While not Korean Air’s 80K round-trip in business, you can fly United to Europe in business for just 88K plus roughly $100 in fees + taxes, and 55K in economy. 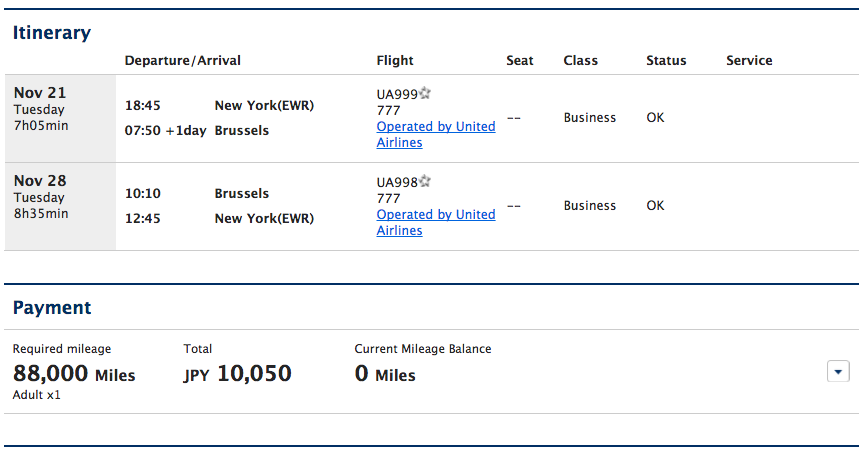 Again, one of the best things about ANA’s award chart in this instance is the region definitions, with Mileage Club counting Morocco, Tunisia, Algeria, the Azores and Madeira, and the Canary Islands all within Europe awards. Likewise, Russia is included in Europe without being split into regions.

One of the things to be wary of with ANA partners is the fuel surcharges. Pricing up a flight to Istanbul on Turkish Airlines, for instance, throws up just under $400 in additional charges. Not huge in comparison to the hefty fees of Lufthansa and BA, they still put a dent in your pocket. 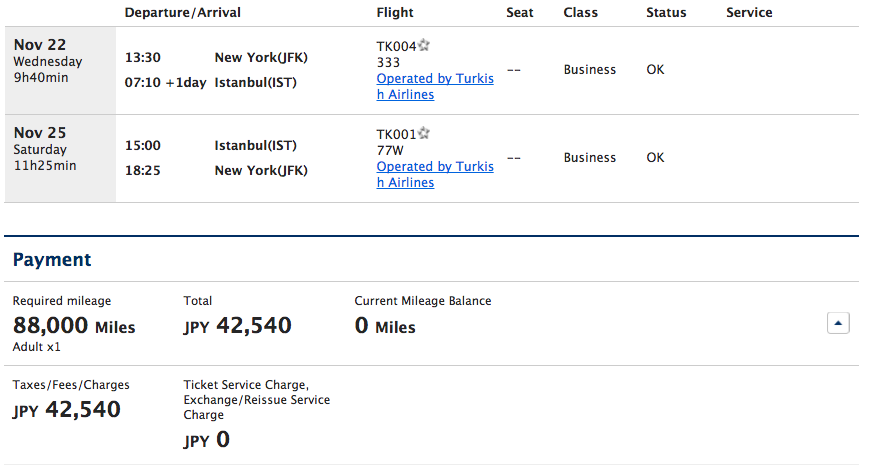 This same award price also applies to flights from the US to South America.

Africa is one region; yes, the entire continent. From the southern border of Morocco, all the way to Cape Town will cost you just 65K in economy and 104K in business. If you can fly partners that don’t pass on surcharges with ANA, you’ll come out of this award miles cheaper than any competing program. The example below, however, is on Swiss & Egypt Air, and cops a weighty $800+ in fuel surcharges. 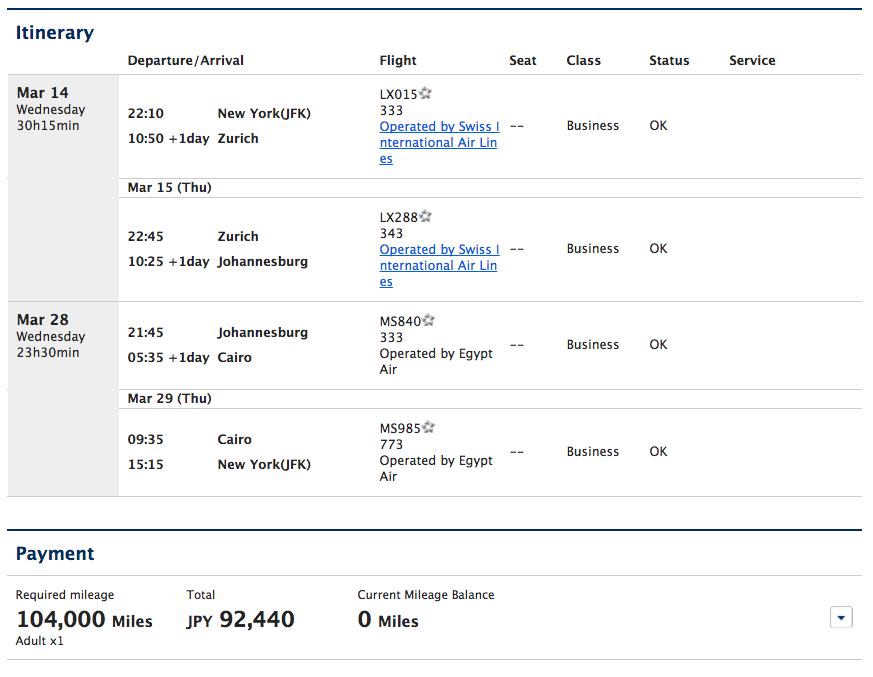 ANA utilizes a bizarre set of region definitions for connecting flights with the world split into 3 Areas. You can only connect within the destination and departure area’s, with the third area effectively out-of-bounds. For example, when flying between US (Area 1) and Asia (Area 3), you can’t connect in Europe, Middle East, or Africa (Area 2).

The bonus to this is that Asia and Oceania are wrapped up into one Area. As long as you price the award on the furthermost destination, you could fly US-Asia with a stopover in Sydney for example. Or vice versa, fly US to Sydney routing through Asia. And to make it even more attractive, round-trip awards to Oceania are just 75,000 miles in economy and 120,000 in business.

ANA has essentially repurposed its old distance-based award chart with a few new rules for RTW awards. We detail the rules in another post so will only summarize them here:

If you are planning a trip down under it might be worth adding some stopovers and keep flying in the direction you started. Your costs climb every time you add a stop, but the price rise in miles is only marginal compared to similar offerings from other frequent flyer programs.

Don't Have Enough Miles for the Award?

In addition to offering the ANA Card U.S.A. (not a card we’d recommend), ANA Mileage Club is a transfer partner of both Membership Rewards and Marriott Bonvoy, so you can transfer points from some of our favorite rewards cards

It takes roughly 2 business days for MR points to transfer through and ANA does not have an award hold policy, something you need to be mindful of when making your points transfer.

With the constant deterioration of value in US frequent flyer programs (with the exception of Alaska), it’s essential to look further afield to try and maximize the value of your rewards points.

ANA’s booking engine can be glitchy when booking anything but the most basic awards, but for a $25 fee, you can speak to a phone rep who, 90% of the time, is well trained, speaks good English, and genuinely wants to help.

Just make sure to research award availability on United or Air Canada first, and don’t forget to read our ANA Award Chart & How to Book ANA Awards posts to get a deeper insight into one of the world's best frequent flyer programs. We've also put together a post of Award Program Sweet Spots if you want to check out some others.

4.4 / 5 ( 12 votes )
Share this:
AwardWallet Tip of The Day
Did you know you can filter the accounts in your AwardWallet profile by program? If you want to view only a subset of your loyalty accounts tracked by AwardWallet, use the Accounts Filter to display only the accounts you're interested in at the moment. Show me how