Qatar Privilege Club Slashes Qmiles Fees. Is the Program Worth a Second Look?

Update: Since making the changes listed below in June 2020, Qatar slashed award rates by up to 49%. Combined with reduced fees, Qatar's Privilege Club is now a lot more attractive. The post below is current as of June 2020. See this post for the latest.

Lately, we're seeing a lot of programs making positive changes to award redemptions. Last month, Emirates cut award fees by over 90%. Last week, ANA dropped fuel surcharges to just $1 per flight. Now Qatar Airways has decided to join in on the fun. Qatar Privilege Club shared with members that it will no longer charge the obnoxious “Award Flight” fees on flights booked with Qmiles.

While it's great that Qatar has implemented this change, many are left wondering if Qatar Privilege Club now merits a second look. The program has previously been a write-off, offering little in the way of lucrative redemption opportunities or outsized value—in direct contrast to its other Middle Eastern competitors Etihad and Emirates. Is it possible that dropping this pesky fee has tipped the scale?

In May 2018, Qatar introduced a fee unlike what we are used to seeing on other airline loyalty programs. The “Award Flight Fee” was essentially a toll, charging Privilege Club members an extra $25, $50, or $75 per award flight in economy, business, or first class, respectively. Round-trip itineraries on Qatar typically include at least four segments (thanks to it's ‘hub and spoke' route network). So, this fee regularly added $100 to 300 to the out-of-pocket cost on award redemptions.

In the world of award travel, we're no strangers to carrier-imposed surcharges. Fuel surcharges can be a nightmare for award travelers booking premium-cabin award redemptions, specifically with British Airways, Lufthansa, and Austrian Airlines. While I'm not too fond of those either, at least they present the illusion that they're linked to fuel costs—a tangible and variable expense that all airlines face.

Conversely, Qatar's “Award Flight Fee” seems groundless. What reasoning could the airline possibly cite for adding a fee for its own loyalty members to book flights operated by its own aircraft using its own currency? It seemed like nothing but a cash grab that only served to devalue the Privilege Club program further.

Thankfully, this fee is no more. Per an email from the airline to its members:

“As we continue to reinstate flights, with 59 destinations globally this June, we want to make it easier for you to use Qmiles to fly to those destinations when the moment is right to explore together again.

That’s why, we will no longer be applying Award Flight fees, usually USD 25 per segment in Economy, USD 50 per segment in Business, or USD 75 per segment in First. You can now choose to book using Qmiles, fee-free and with ease, at qmiles.com and the mobile app.” 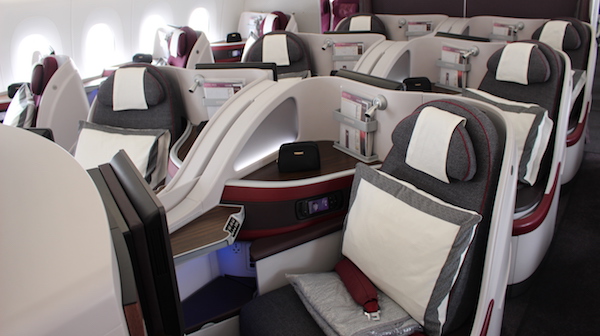 Is the Qatar Privilege Club Worth a Second Look?

In addition to offering an incredible onboard product between an extensive network of destinations, Qatar Airways is also a member of Oneworld—partnering with other great airlines like AA, Cathay Pacific, JAL, and Qantas. This position has all the makings of a very lucrative loyalty program, especially considering Qatar Privilege Club is a transfer partner of both Citi ThankYou Points and Marriott Bonvoy Points. (CapitalOne ended its partnership with Qatar in May 2020.) 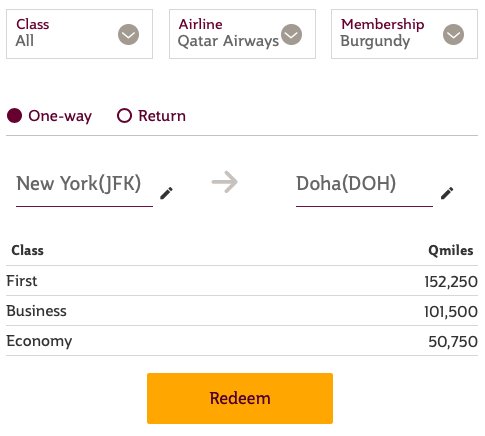 Itineraries with connections add between 20,000–50,000 miles to the economy price, with business and first following the same multiplier. After searching for a while, it's apparent that Qatar still utilizes an expensive flight-distance based pricing scheme.

So, it seems that booking through partners is still going to be the better option for Qatar flights.

AAdvantage: You could book the same flight in the same class of service using 40,000 (economy); 70,000 (business), or 115,000 (first class) AA AAdvantage miles. The downside is that AAdvantage isn't a transfer partner of any bank transferrable currencies. 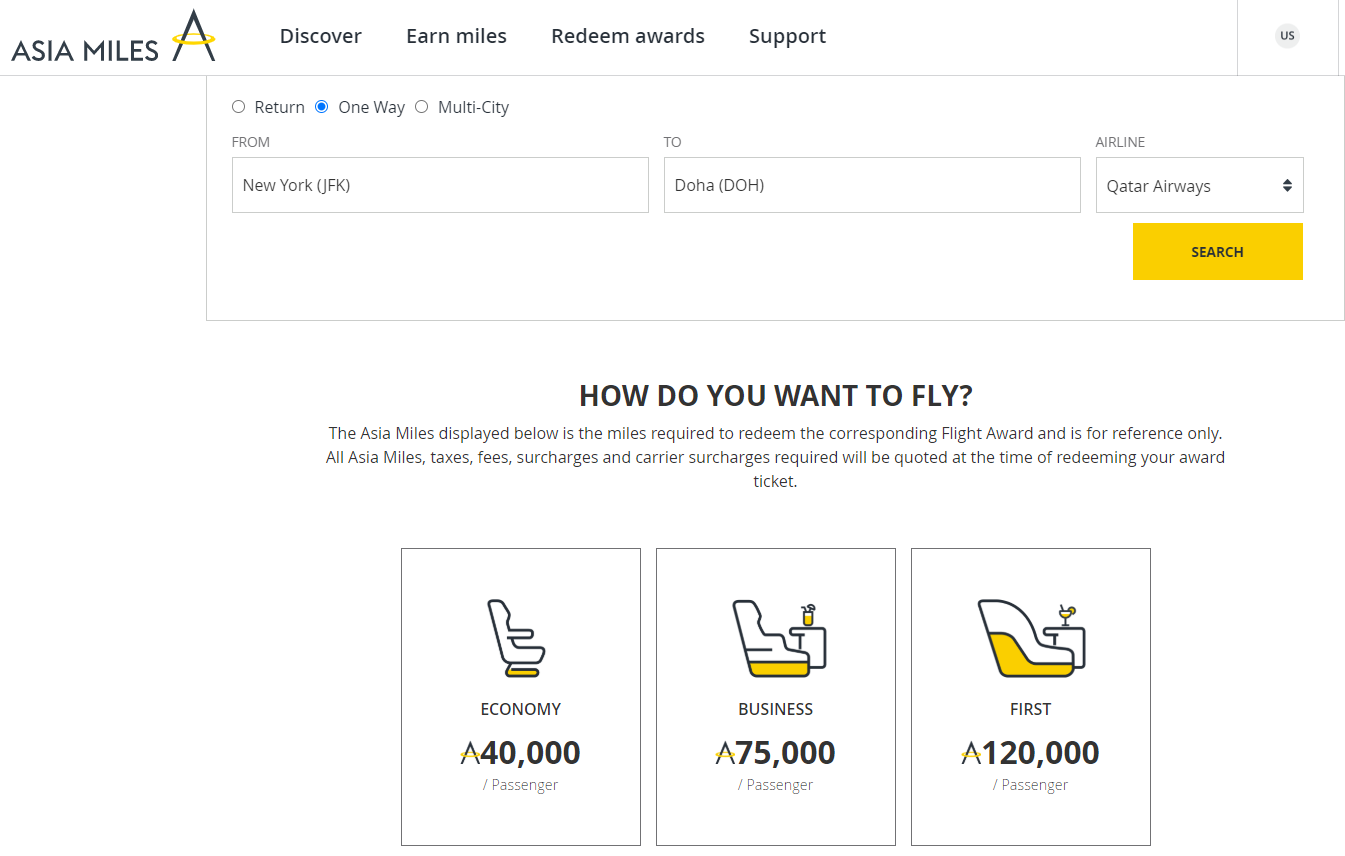 Qatar Privilege Club's partner pricing is even worse. For instance, Royal Air Maroc operates two non-stop routes from the U.S. to its hub in Casablanca (CMN)—one from New York City (JFK) and one from Washington D.C. (IAD). These hops across the Atlantic are between 3,600–3,800 miles long and take between six and a half to seven hours. 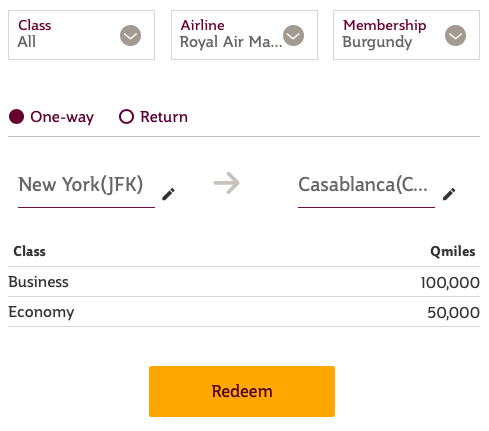 While Qatar requires 50,000 Qmiles for a one-way economy redemption, you could use Etihad miles to book yourself in business class for only 44,000 miles. You read that right. Qatar charges 6,000 more miles to fly in economy than Etihad charges for flying in business class!

While distance-based award charts aren't good for long flights, they can often be lucrative for short-haul flights. And that seems to be the case with Qmiles as well.

Qatar has one of the most spectacular first-class ground experiences in the world—including a separate sit-down check-in area, private immigration and security, and a first-class lounge that's considered one of the best in the world. Unlike Qatar's Oneworld partners, Qatar doesn't make its first-class experience available to Oneworld elites. Instead, you must be flying Qatar's first class to access this experience.

One of the shortest routes that you can fly Qatar first class is between Doha (DOH) and Muscat (MCT). This route costs just 21,000 Qmiles in first class. Now you can book these flights for $75 less out-of-pocket. 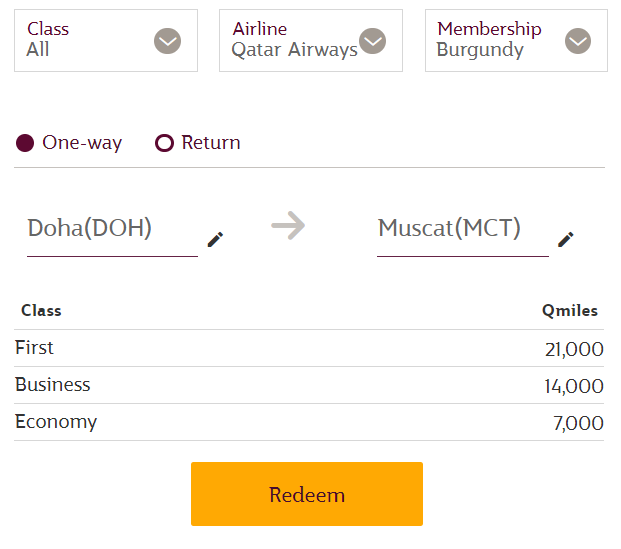 Further complicating the process, Qatar Privilege Club doesn't allow you to view award availability if you don't already have enough Qmiles in your account. This means that unless you already have a bunch of miles sitting in your account from flying, you'll have to either call Qatar's Contact Centre or search using a partner website such as American Airlines, British Airways or Qantas.

While I'm glad to see Qatar do away with this absurd fee, award pricing with the Privilege Club program still isn't attractive enough for it to be a viable contender on my radar. In most (if not all) circumstances, you'll find much better redemption opportunities using another program.

On the bright side, I am excited about what this news represents for award travel as a whole. We've now seen three major airlines make significant cuts to their carrier surcharges. While I recognize that these airlines could easily reinstate them after global travel improves, it's hard not to be excited about it now. More importantly, I wonder which airline is next? (We're still looking at you, Lufthansa.)

Now that you don't have to pay this fee, are you more likely to book an award flight using Qmiles?