Noted initially by Spencer Howard from Straight to the Points (and shared by FrequentMiler), it appears that ANA has lowered the carrier-imposed surcharges on itineraries to and from Japan to just $1 per segment. 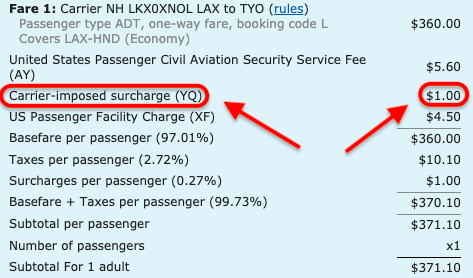 Similarly, this two-segment itinerary between Chicago (ORD) and Singapore (SIN) via Tokyo (HND) shows $2 in surcharges: 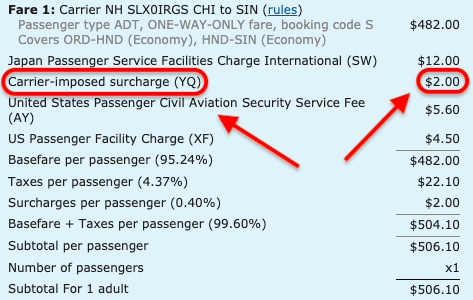 Before ANA made this change, it wasn't unusual for the carrier-imposed surcharges to be as high as $80-100 each way between the U.S. and Japan. That's a far cry from the $800-1,000 surcharges some other airlines charge (we're looking at you, Lufthansa). However, it still ate into the value of awards. Charging $1 per segment is a significant improvement.

We don't know whether this will be a permanent update or just a temporary change in light of current circumstances. We're keeping our fingers crossed that it's the prior.

Not All Routes Have Been Cut

However, ANA is still imposing higher carrier-imposed surcharges on some connecting itineraries. Take this itinerary from Los Angeles (LAX) to Delhi (DEL) via Tokyo Haneda (HND) for example:

How Does This Affect You?

The story behind what fuel surcharges are and why airlines levy them is a bit complicated. In a nutshell, airlines have tacked these on for years as a sneaky way of boosting profits without raising the ‘base fare'. For many reasons, this can be advantageous for the airline, including marketing opportunities, limiting travel-agent commissions, and offering “discounted fares” for corporate clients.

For passengers paying for flights with cash, this won't change much. Airlines are typically required to display the ‘all-in' ticket price from the start of your search, without adding taxes and extra fees after you've settled on a fare. Subsequently, the prices you're seeing while shopping around for a ticket will already have carrier-imposed surcharges factored in. Once you've settled on a price, it doesn't really matter (to you) what the price consists of, even if taxes and surcharges make up the largest percentage.

Where this helps, however, is with award bookings. Some loyalty programs impose carrier-imposed surcharges on award bookings, requiring a hefty cash co-pay in addition to the points or miles.

Now that ANA's surcharges are lower, the cash co-pay for award bookings are also lower. A quick search on Air Canada Aeroplan—which known to pass on surcharges on ANA award redemptions—shows the far more palatable out-of-pocket costs for an award booking in ANA first class:

Results are similar when searching the other partners typically used to book ANA award tickets—such as Virgin Atlantic and ANA Mileage Club. Since United MileagePlus and Avianca LifeMiles have never passed along surcharges on ANA bookings, you'll see no change there.

Surcharges can be one of the most annoying aspects of making an award booking. The last thing anybody wants to do after shelling out a ton of points for a great redemption is to pay a bunch of money to book it.

With that in mind, lower surcharges are always an improvement, regardless of whether we'll necessarily see a difference in cash fares. Fingers crossed that this is a permanent change.

Are you more likely to book an award with ANA with these lower surcharges?