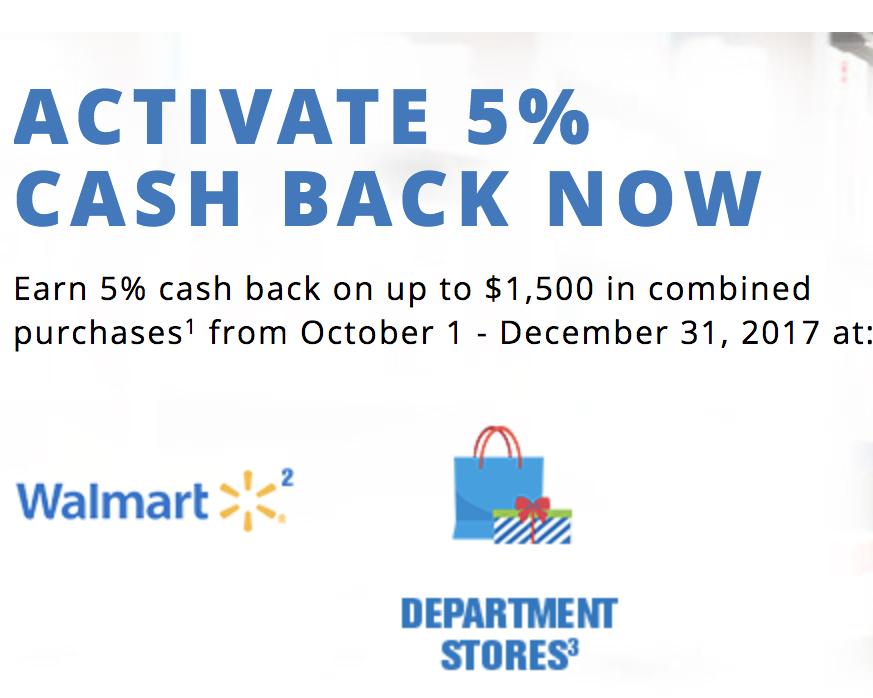 This promotion has ended, however, you can check out the Current Chase Quarterly Bonus promo.

Chase has announced its Q4 2017 5% cash back promotion for Chase Freedom® cardholders. This quarter you can earn up to 5% cash back on bonus categories including at department stores and Walmart. 5% cash back earning is limited to $1,500 of qualifying purchases, earning you a maximum of $75 cash back.

How To Activate The 5% Cash Back

Activating your cash back is easy. Head to the activation page, and enter your last name, the last four digits of your card number, and your zip code.

Which Stores Are Eligible For Cash Back

The promo is valid at Walmart and selected department stores. The following Walmart brands qualify for the 5% cash back:

Bear in mind that there are some exclusions to the earnings at Walmart. Per the Chase website, “Non-Walmart merchants operating within or on Walmart premises including merchants that sell fast food, beauty services, and gas stations that are not Walmart branded” are excluded from earning he 5% cash back.

Not all big-name department stores are participating in the promotion, and the following are excluded from earning the 5% cash back:

Earning $75 cash back on $1,500 of spending is a great deal, especially if you consider that the promotion covers the bulk of the holiday season, and the list of participating stores is quite large, so there should be ample opportunity to maximize your earnings. Bear in mind that as usual with the Chase Freedom® you earn 1% cash back on all other spending, including at the participating stores once you have maxed out your 5% earning.

Chase Freedom Q4 2017 5% Bonus Registration Live (Walmart & Department Stores)
5 (100%) 9 votes
Share this:
AwardWallet Tip of The Day
Did you know that with a wide display you are able to expand the AwardWallet window to see the Last Updated column? You can easily see the last time your balance was checked by AwardWallet. Show me how